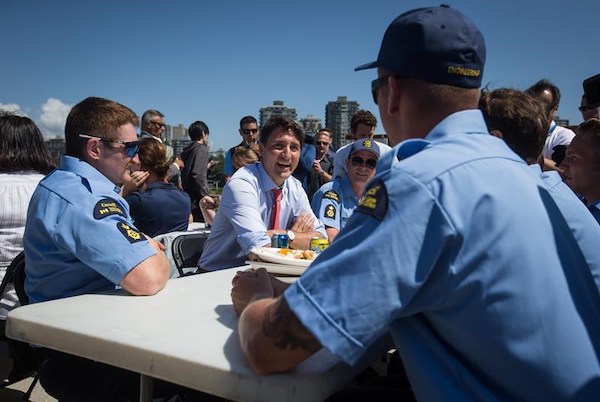 Prime Minister Justin Trudeau, back centre, talks with members of the Canadian Coast Guard after an announcement at the Kitsilano Coast Guard Base, in Vancouver, on Monday, July 29, 2019. (THE CANADIAN PRESS/Darryl Dyck)

Trudeau, who was in Vancouver Monday to mark the completion of renovations at the Kitsilano Coast Guard Station, told a crowd that his thoughts are with those involved in the crash, their families and their friends.

“And to the members of the coast guard who were on the scene: thank you. When Canadians need help they know they can look to you. Whether here on the west coast or in the St. Lawrence or out east, every day members of the Canadian Coast Guard do vital, life-saving work.”

The Kitsilano coast guard base was shut down by the former Conservative government in 2013, then reopened shortly after the Liberal government took power in 2015.

The Canadian Coast Guard and the Joint Rescue Co-ordination Service responded to the crash of the float plane Friday on a remote and uninhabited island off B.C.’s central coast.

Crews found four people dead and five others injured in the steep and forested terrain.

“This has obviously been a terrible tragedy. Our thoughts are with those involved and with their families, their friends and their communities.”

The Transportation Safety Board sent a crew to investigate on the remote island, about 100 kilometres north of Vancouver Island.

The BC Coroners Service says in a statement that it will also investigate to determine if recommendations it makes could prevent deaths in similar circumstances.

It says the recovery of the bodies is complete and they are being transported to confirm identification.

The service says it will not be releasing the identity of any of those killed.

Early Monday evening, Trudeau made a stop on Davie Street to shake hands and take photos under rainbow flags at the Fountainhead Pub before heading off to a Liberal Party fundraiser at the University of British Columbia.