RCMP Scaling Down Search for Murder Suspects in Northern Manitoba 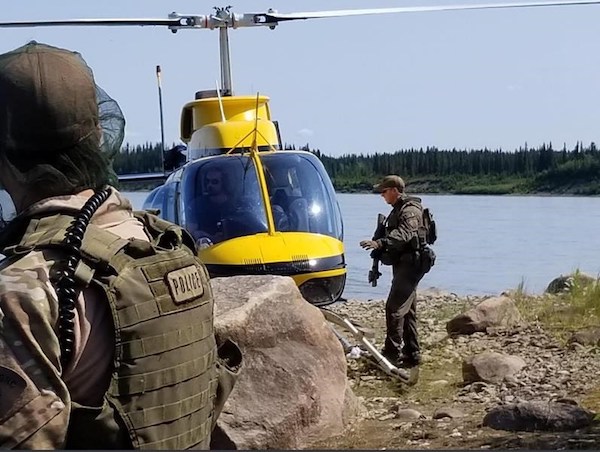 RCMP search an area near Gillam, Man. in this photo posted to their Twitter page on Tuesday, July 30, 2019. Officers are in the Gillam area to search for 18-year-old Bryer Schmegelsky and his 19-year-old friend Kam McLeod. The teens are charged with second-degree murder in the death of one man and are suspects in the fatal shootings of a young couple. (THE CANADIAN PRESS/HO, Twitter)

WINNIPEG — An exhaustive search through Manitoba’s immense and unforgiving north has yielded no sign of two British Columbia murder suspects, so police say they are scaling back their manhunt in the area.

“I think we’ve done everything we can and pulled out all the stops,” RCMP assistant commissioner Jane MacLatchy told a news conference in Winnipeg on Wednesday.

“It’s just a very tough place to find somebody who doesn’t want to be found.”

Over the past week, officers have searched more than 11,000 square kilometres of wilderness using the best technology available, she said, and there has been no sign of fugitives Bryer Schmegelsky, 18, and Kam McLeod, 19.

MacLatchy emphasized that the search is not over, but resources will be scaled down over the next week. Military aircraft that were helping with the search have pulled out but are available if needed again, she said.

Schmegelsky and McLeod are charged with second-degree murder in the death of University of British Columbia professor Leonard Dyck, whose body was found earlier this month in northern B.C.

Police also consider the men suspects in the shooting of Australian Lucas Fowler and his American girlfriend Chynna Deese, who were found dead on the Alaska Highway near Liard Hot Springs, B.C.

Schmegelsky and McLeod were initially thought to be missing persons but were later named as suspects in the killings. After a few sightings across the Prairies, a burned-out vehicle the pair had been travelling in was located near Gillam.

Search efforts moved southwest to York Landing earlier this week after there was a tip the suspects were spotted rummaging through a garbage dump there. But the sighting could not be substantiated and officers returned to Gillam and the nearby Fox Lake Cree Nation.

MacLatchy said investigators are open to other possibilities, including that the suspects are dead or somehow got a ride out of the area and are somewhere else.

John McDonald, Gillam’s deputy mayor, said the longer there are no sightings, the more locals think the suspects have met their fate in the wilderness.

“Without familiarity with the bush around here, I don’t think anybody is giving them much of a chance of survival.”

People in the town are still encouraged to lock their doors and report anything suspicious, McDonald added.

“Until it’s determined one way or another what happened to these guys, this is going to be the new normal.”

Meanwhile, provincial police in Ontario said they were investigating after someone reported seeing two men who looked similar to McLeod and Schmegelsky in the northeastern community of Kapuskasing.

OPP Const. Michelle Coulombe said a suspicious vehicle was reported driving through a construction zone Wednesday morning. Officers hadn’t been able to track it down as of Wednesday afternoon.