Home » News » Sobeys to Eliminate Plastic Bags from Stores in 2020

Sobeys to Eliminate Plastic Bags from Stores in 2020 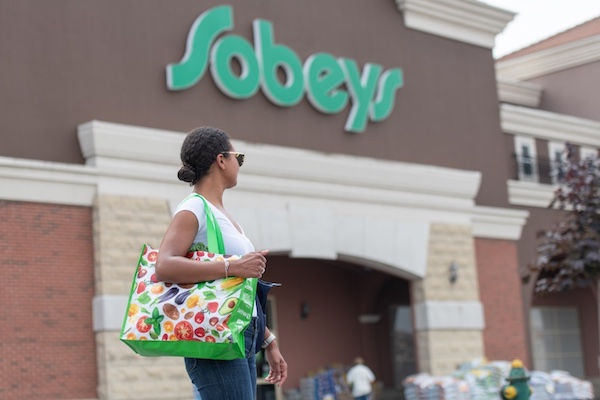 Sobeys will eliminate plastic bags as a first step in removing unnecessary plastic from its retail stores in early 2020. In this file photo, a woman leaves a Sobeys store carrying a reusable tote. (SOBEYS INC. / CNW GROUP)

As more retailers move away from single-use plastics, Sobeys has announced it will be the first national grocer to eliminate plastic bags from its stores by early next year.

The chain says the move, which will take effect by the end of January 2020, will remove 225 million plastic bags out of circulation at Sobeys’ 255 locations across Canada each year.

Sobeys will introduce paper bags in its stores to replace plastic, as well as in its other company-owned Safeway, FreshCo, Foodland and IGA stores.

“So many of our customers and our employees have told us loud and clear — they want us to use less plastic — and we agree with them,” said Michael Medline, president and CEO of Empire, in a release.

“This is a first step, and we plan to make meaningful progress every year to take plastic out of our stores and our products.”

As another incentive to ditch plastic, IGA stores on Montreal Island will launch a campaign in September to encourage reusable bag adoption by offering designated parking spots for customers who bring reusable bags to shop.