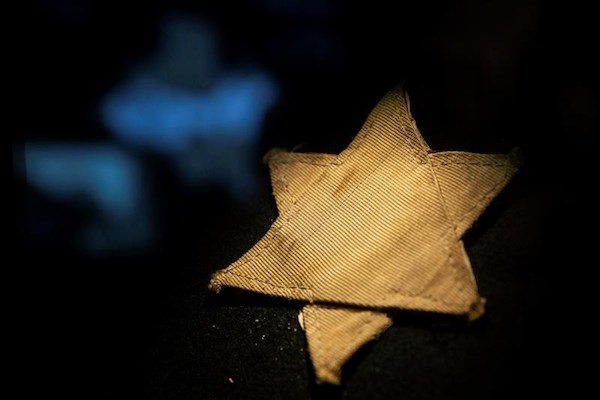 A yellow star to represent the Star of David, made of fabric on display in the Holocaust Memorial Center in Budapest, Hungary, Thursday, Jan. 24, 2019. Statistics Canada officials estimate the number of people identifying as Jewish in the 2016 census could have been double what it was if not for a small change on the questionnaire. (THE CANADIAN PRESS/AP, Balazs Mohai/MTI

OTTAWA — Statistics Canada officials estimate the number of people identifying as Jewish in the 2016 census could have been double what it was if not for a small change on the questionnaire.

The number of people identifying themselves as ethnically Jewish on the census has been steadily declining since 2001, but the 53.6 per cent drop between 2011 and 2016 was far too precipitous to be part of an ongoing trend.

A newly released review by Statistics Canada said the census could have identified between 270,000 and 298,000 Jews in Canada in 2016 if response patterns remained steady, instead of the almost 144,000 captured in the population count.

The review said the decline is most likely linked to the removal of Jewish on a list of examples that goes along with the question about ethnic and cultural origins. Deaths and emigration couldn’t account for the dramatic decline, nor were there errors in how the information was compiled.

Dropping the examples entirely wasn’t an option, the review said, because doing so could cause additional problems that would affect the results, such as respondents not understanding the question.

The national statistics agency has opted to test a new way to ask people about their ethnic origins, trying to wrangle a complex issue into a simple-to-understand question in time for the 2021 population counts.

Jack Jedwab, president of the Association for Canadian Studies, said the concerns Jewish groups first raised about the 2016 census results has become a much larger issue affecting ethnic and cultural groups.

Ethnic and cultural groups rely on the census to create as accurate a picture as possible about their groups to help with decisions about programs and outreach, for instance.

The numbers are used in other ways as well: Elections Canada cited the census data as part of its decision Monday to not shift voting day this fall from Oct. 21, despite its overlap with a Jewish holiday observed by Orthodox Jews who cannot vote or take part in campaigns that day. The census figures will help the elections agency determine where to deploy resources to help affected voters cast their ballot.

Figures for the ethnicity question can fluctuate over time because how people identify ethnically and culturally can change from one census to another. It’s likely to fluctuate even more, Jedwab said, because of “an evolution in the way people understand the notion of ethnicity” and increasing interest in tracing one’s genealogy made easier through online services.

Statistics Canada’s long-standing practice is to ask respondents for the ethnic and cultural origins of their ancestors, listing just over two dozen examples based on the most frequent responses from the previous census.

Most of the examples are for countries — meaning that someone who identifies as Czech may mark it down even if it is not included in the list — but there may not be an equivalent for a “non-country-based origin” like Jewish, the review said.

Statistics Canada is testing a method that provides only a brief description of different types of origins on the electronic questionnaire, but accompanies it with a link to “an extensive list of more than 400 origins” for anyone needing additional information.

The tests of the questions for the 2021 census take place this year. Statistics Canada doesn’t publicly release the results of the tests.