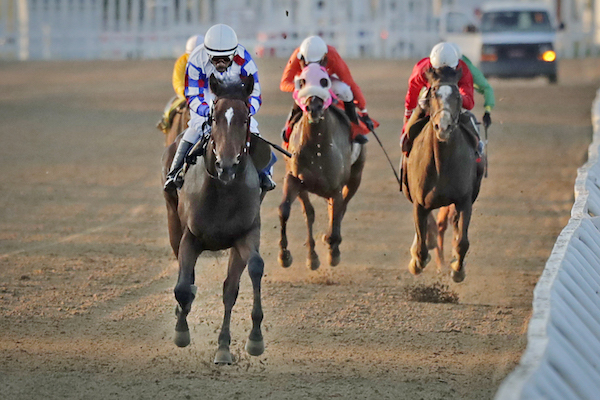 Find your hats, bring your appetite and fill up your wallet. It’s Derby Weekend at Assiniboia Downs and for three days — August 2, 3 and 5 — the Peg’s little track in West Winnipeg will offer up the finest thoroughbred racing in Western Canada.

“It is essentially a festival of racing at Assiniboia Downs this weekend,” said CEO Darren Dunn. “With no less than four stakes races, including the biggest race of the year, the Manitoba Derby, there is a reason to be here all three days. Beyond the obvious of the big race on Monday afternoon, is the chance to watch the undefeated super filly, Hidden Grace, put her unblemished record on the line against the strongest field to date on Friday night in the Manitoba Oaks.”

On Friday night, the 8-5 morning-line favourite in the Debutante is Edge of Okotoks, the invader from Century Mile in Calgary, trained by Tim Rycroft and ridden by Wilmer Galviz. Edge of Okotoks will be challenged by local two-year-old Be Amazing (5-2), trained by Murray Duncan and ridden by Tyrone Nelson and another invader, the Robertino Diodoro-trained Arizona Sun at 3-1. Arizona Sun has raced twice at Turf Paradise in Phoenix this year, winning once. She’ll be ridden by defending jockey champion Antonio Whitehall.

In the Oaks, the Downs’ three-year-old filly championship, the favourite is clearly Hidden Grace, the undefeated sister of Escape Clause. Hidden Grace (6-5) is trained by Michael Nault and ridden by Renaldo Cumberbatch and has not lost in five-lifetime races – three this year. Last year, she won the Debutante and the CTHS Sales Stakes. This year, she has won the Hazel Wright Sire Stakes, the Chantilly and the R.C. Anderson Stakes. She’s won $110,637 in her very-brief career and might even be the highlight of the biggest racing weekend of the 2019 Meet.

With Hidden Grace in the Oaks, it opens up the field for Monday’s Derby. There were 15 nominations, as reported here at chrisd.ca, but as we suggested, there will likely be eight at the starting gate on Monday.

“Our expectation for the Manitoba Derby is a field of eight,” confirmed Dunn. “We believe we will again have solid representation from top North American trainer, Robertino Diodoro. When you consider he has won this race two of the last three years, it is fair to say that the road to the winner’s circle likely goes through his barn.

“The Derby is setting up to have a solid mix of both local representation and invaders from outside of the Province. A few will stand above the rest and get heavy respect on the tote board leaving some longshots for those who want to take a leap of faith. The race looks like it will offer both strong early speed and significant closers who will have a great shot to take advantage of the long Assiniboia Downs stretch drive.”

Meanwhile, it’s also a big weekend for the jockey and trainer championship races.

The post-parade on both Friday and Saturday nights are at 7:15. First post at 7:30. On Monday, first post is 1:30 with the 71st running of the Manitoba Derby going to post around 5 p.m.