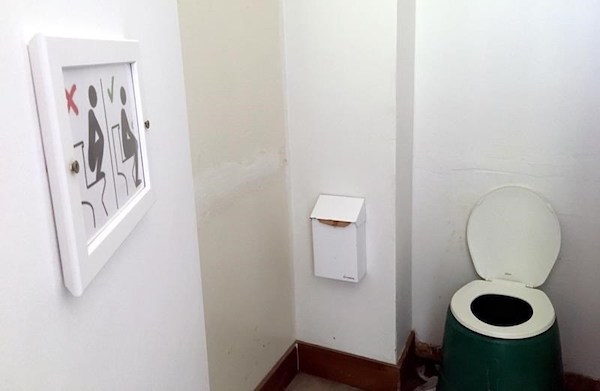 Interior view of an outhouse at the Lake O’Hara parking lot at Yoho National Park in the Rocky Mountains, in eastern British Columbia on July 28, 2019. (THE CANADIAN PRESS/Colette Derworiz)

YOHO NATIONAL PARK, B.C. — Some new signs are popping up in the Canadian Rockies to show international visitors how to properly use outhouses.

Staff at Lake O’Hara in British Columbia’s Yoho National Park installed toilet etiquette signs, which ask users to sit rather than stand on toilet seats, in bathroom facilities in June.

“We’ve noticed that some visitors who aren’t used to Western-style toilets — they may attempt to stand up on the seats when using the toilet,” said Jed Cochrane, an acting visitor experience manager in Banff, Yoho and Kootenay national parks.

“Because the toilet is not designed for that, it ultimately creates problems with cleanliness.”

Standing on a toilet, he said, can also lead to a broken seat or a broken seal at the bottom of the toilet because weight is higher up than it should be.

“And there’s always the risk of falling, which no one wants to do,” added Cochrane.

Some public toilets in Asian countries and the Middle East are pit latrines, which require users to squat over an open hole.

Signs that show people how to use seat toilets can also be found in other tourist locations, including the Swiss Alps and parts of the United Kingdom.

Cochrane said Canada’s mountain parks have started seeing an increase in international visitors over the past decade.

“We are seeing more and more people coming from countries all over the world,” he said. “In some places, we are just seeing more visitors that aren’t used to this style of toilet.”

Jia Wang, deputy director of the China Institute at the University of Alberta, said there are cultural differences in how toilets are used.

“It’s more of an Asia thing, but not just Asia,” she said. “A lot of other countries have this as well.”

“For a lot of people, their argument is: ‘I don’t find it sanitary to be sitting on the seat,'” she said.

Still, Wang said there’s no excuse for standing on a toilet seat.

“By offering alternatives or seat covers, some tourists would be more comfortable using it,” she said.

“It’s not like most people don’t know what to do with those toilets. It’s just that they are used to the other kind of toilets when they were growing up and, more likely, it’s because of the sanitary reasons.”

Wang noted that many airports and airplanes provide seat covers in consideration of international tourists.

Officials with Parks Canada said they are considering toilet etiquette signs in other busy locations, including Lake Louise in Alberta’s Banff National Park, and have started adding more signs with pictures rather than words to better help tourists who can’t speak English or French.

The signs, said Wang, are fine as long as they are coming from a good place.

“We don’t want to be seen as discriminating,” she said. “It’s more like for your information.

“We don’t want to accidentally offend people just because of what we assume. We want to welcome tourists from all over the world — it doesn’t matter where. It’s good for our economy and it’s good for a lot of things here.”