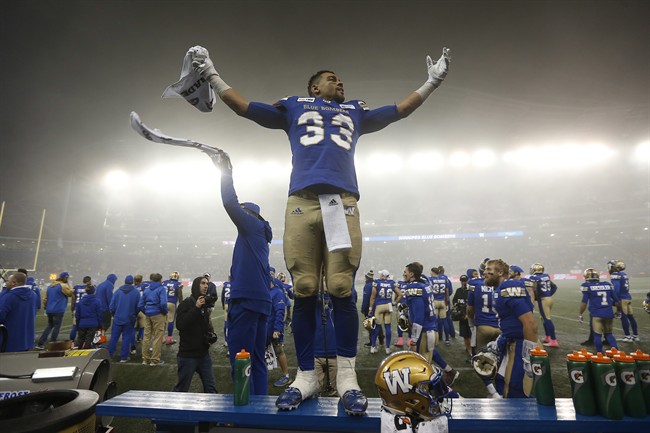 Winnipeg Blue Bombers’ Andrew Harris (33) cheers with the crowd in the last seconds of their CFL game against the Calgary Stampeders, in Winnipeg, Friday, Oct. 26, 2018. (THE CANADIAN PRESS/John Woods) 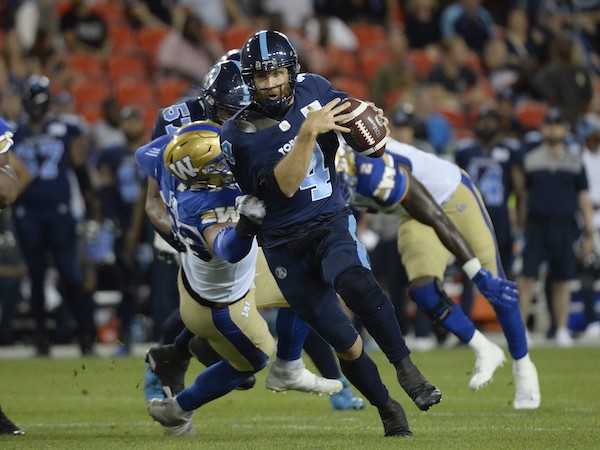 Toronto Argonauts quarterback McLeod Bethel-Thompson (4) runs for the first down against the Winnipeg Blue Bombers during second half CFL football action in Toronto on Thursday, August 1, 2019. (THE CANADIAN PRESS/Nathan Denette)

TORONTO — Blue Bombers head coach Mike O’Shea would love it if his whole team was as reliable as Andrew Harris.

The veteran running back ran for 152 yards, scoring his first two rushing touchdowns of the season, and caught six passes for 45 yards as Winnipeg was upset by the Toronto Argonauts 28-27 on Thursday. Harris’s first TD of the night was a 56-yard dash where he broke several tackles before streaking to the end zone early in the first quarter.

“Andrew’s good every night,” said O’Shea. “He took those check downs, he ran hard, he broke some big run plays, he had a hell of a touchdown at the beginning of the game where he broke through and kept that distance, out ran guys.

“I’ve said this numerous times: we’ll hook the wagons to Andrew any chance we get.”

Harris entered the game with 494 rushing yards on the season, 10 yards behind Montreal’s William Stanback for most in the CFL.

But Stanback had four touchdowns through five games and Saskatchewan’s William Powell — third in the league with 469 yards entering Week 8 — had six TDs, while Harris had yet to find the end zone on a rushing play.

He was relieved to get the monkey off his back early in the game but was disappointed in the loss.

The Blue Bombers came into southern Ontario with a perfect 5-0 record but left with back-to-back losses to the Hamilton Tiger-Cats and the lowly Argos. Toronto started the season with a six-game winless skid before Thursday night’s victory at BMO Field.

It wasn’t just that Winnipeg lost to the team with the worst record in the CFL, but how it happened.

The Blue Bombers had a 20-0 lead with four minutes remaining in the second quarter but gave up 10 points before halftime to let Toronto back in the game.

“We need to finish, we need to be more disciplined,” said Harris. “Obviously, we can’t take anyone lightly. I think that we made a lot of mistakes today and, overall, we started off well and the momentum kind of shifted and we never got it back.”

With games in Hamilton and Toronto so close together, the Bombers decided to stay in nearby Guelph, Ont., for the week to practice and bond. A good idea in theory, defensive end Willie Jefferson is ready to get back to Manitoba.

“Coming out here for two weeks, being in the east, away from home, not being able to do our normal routines, things got away from us,” said Jefferson. “I’m not saying we weren’t focused, but some of the little things came in to play during the game.

“Moving forward for us, we’re just happy to be going back home, back to our regular routine.”

Winnipeg is still in first in the West Division, but the Calgary Stampeders (4-2) could catch them on Saturday when they host the Edmonton Eskimos on Saturday.