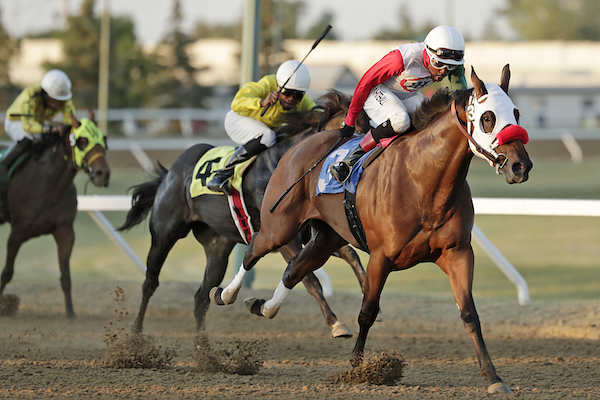 On Friday night at Assiniboia Downs, Hidden Grace, the baby sister of the magnificent mare Escape Clause, defeated the toughest field she’s seen yet to win the $30,000 Manitoba Oaks, the unofficial three-year-old filly championship of Manitoba.

In the other major stakes race of Manitoba Derby Weekend at the Downs on Friday night, Alberta invader Arizona Sun won the $30,000 Debutante Stakes, for two-year-old fillies.

For Hidden Grace, however, Friday night’s win, over a one-mile distance, was both expected and monumental.

In a field that included Something About Me, a Tim Rycroft-trained invader from Calgary; a Robertino Diodoro-trained filly from Canterbury named Dress Shopping that finished second in the Jack Hardy Stakes in Winnipeg on July 12 and Hidden Grace’s barn-mate, Sheena, a Michael Nault-trained filly that won the Hardy Stakes, Hidden Grace had no equal.

Hidden Grace has now won all six races in which she’s competed – and all of them were high-class ASD stakes races. A beautiful bay filly from Going Commando bred in Manitoba by Cam Ziprick, Charles Fouillard and Barry Arnason. Hidden Grace won both her races as a two-year-old – the Debutante Stakes and the CTHS Sire Stakes and has won all four races she’s run this year – The Hazel Wright Sire Stakes, the Chantilly, the RC Anderson Stakes (a race she won by nearly 12 lengths on July 13) and now the Oaks.

As expected, Sheena bolted to the lead and maintained a rather slow pace while Hidden Grace tracked inside. At mid-turn, Jockey Renaldo Cumberbatch asked Hidden Grace for just a little more and she responded, challenged Sheena inside on the final turn, duelled briefly and then opened up down the stretch. Hidden Grace herself was challenged by Storm Stride and Dress Shopping, but she held well and won by a nearly two lengths.

“With her speed, style and what seems like push-button acceleration, this filly leaves you with the impression she has nothing but blue skies ahead,” said Downs CEO Darren Dunn. “She is already dominant in the three-year-old filly category.”

The big question now is: When do her owners, Barry Arnason, Cam Ziprick and Charles Fouillard decide it’s time to take her out onto the U.S. circuit, just as Arnason did with her sister Escape Clause? Arnason and Escape Clause’s trainer Don Schnell, believed they might have waited too long, taking Escape Clause to the States as a five-year-old. Could they decide to take Hidden Grace south as a four-year-old or even a three-year-old? After all, there are no three-year-old filly stake races remaining at the Downs this year.

Meanwhile, there was a record set at the Downs on Friday night. In Race 2, 99-1 shot Sheer Prince upset a solid field that included the leading winner in North America last year and the claimer of the year, Hot Rodin. Sheer Prince paid an Assiniboia Downs record $122.70 to win. Interestingly, in what was a $5,000 claiming race, Hot Rodin was claimed from Juan Pablo Silva by owner-trainer Maria Stanford while Alberta-invader Willy Be Smart, trained by Tim Rycroft, was claimed by Silva.