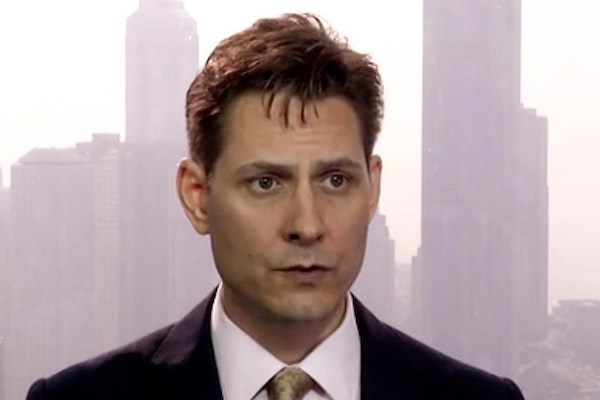 In this file image made from a video taken on March 28, 2018, Michael Kovrig, an adviser with the International Crisis Group, a Brussels-based non-governmental organization, speaks during an interview in Hong Kong. (THE CANADIAN PRESS/AP)

OTTAWA — Consular officials in China have met for the 10th time with a detained Canadian, Global Affairs Canada said Monday.

The department said it cannot provide details on the Monday visit due to privacy provisions but officials continue to seek further access to Michael Kovrig.

Consular visits generally involve assessing the well-being of a Canadian citizen, providing guidance on the legal process in a country and facilitating a communication link between the Canadian and their loved ones.

The detentions of Kovrig, as well as fellow Canadian Michael Spavor, are largely viewed as retaliation for the December arrest of Huawei executive Meng Wanzhou in Vancouver. Meng is awaiting extradition to the U.S. to face allegations of fraud in violating Iran sanctions.

The Canadian government has repeatedly said it is deeply concerned about the arbitrary detentions of Kovrig and Spavor and that it calls for their immediate release.

Canada has also received support on the issue from a range of countries including Australia, France, Germany, Spain, the United Kingdom and the United States.

On Friday, Foreign Affairs Minister Chrystia Freeland met with her Chinese counterpart during a summit of Southeast Asian Nations in Bangkok, Thailand, where the two also discussed the detentions of Kovrig and Spavor.

Freeland raised the issue of the two Canadians, and Wang Yi “expressed concerns” about Meng’s extradition process, the minister said during a conference call without elaborating further.

When the meeting was over, she said the two agreed they would keep the lines of communication open.

Details of future discussions will be largely kept behind closed doors, she added, noting Canada’s relationship with China is “complicated” at the moment.

Freeland also characterized her conversation with Wang as evidence of progress.

“The fact we were able to speak and discuss these issues face to face, directly with one another, absolutely is a positive step,” she said.

Conservative Leader Andrew Scheer has criticized the Liberal government for what he called a lack of action on the China file — including not complaining to the World Trade Organization about China’s efforts to hamstring Canadian exports to the country, or appointing a new ambassador.