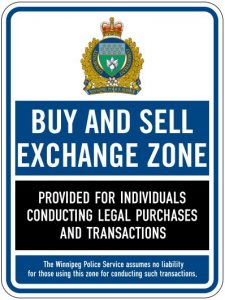 Winnipeg police have set up four locations for individuals to conduct buy and sell transactions with an added layer of security.

Buyers and sellers can now conduct business at each of the four main Winnipeg police stations near designated signage in the parking lot.

The exchange zones may be subject to video monitoring and allow people to meet in a public place to complete the transaction.

Police suggest such transactions are made during daylight hours when the stations are open to the public. Brandon police established their own safe exchange transaction zone in May 2017.

Police say officers won’t be assisting with the transactions, including monitoring, negotiation, or completing of exchanges for anyone. Exchanges involving weapons or illegal items are not permitted.

Police spokesperson Const. Tammy Skrabek says the move comes as the police service has seen an increase in online robberies within the past year.

“In 2018, we had approximately 60 online robberies reported. We know that there are a number of these thefts taking place that aren’t reported to police, so we expect the number is a little bit higher, but it’s significant.

“We have said all along that members of the public — whether buying or selling — could conduct those transactions at police stations. Now we’re just formalizing that… putting up signs where they (the public) can go.”

Police offer several crime prevention tips while dealing with a transaction. The locations of each buy and sell exchange zone can also be found on the Winnipeg police website.