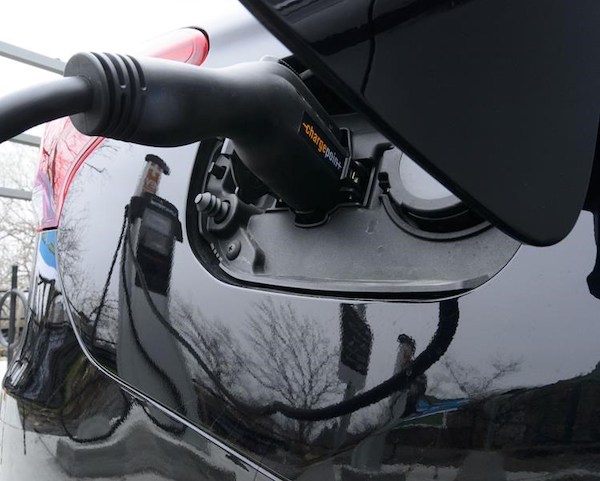 A car is charged at a charge station for electric vehicles on Parliament Hill in Ottawa on Wednesday, May 1, 2019. (THE CANADIAN PRESS/Sean Kilpatrick)

On May 1, Ottawa began offering rebates of up to $5,000 on the purchase of some electric vehicles in a bid to bring the cost of lower-end models closer to that of their gas-powered cousins.

Last year, electric and plug-in hybrids accounted for about two per cent of total vehicle sales.

Matthew Klippenstein, an engineer who began tracking electric vehicle sales a few years ago on his website Canada EV Sales, said they accounted for four per cent of all vehicle sales in May and June.

It’s still a tiny share — the Ford F-series pickup trucks alone accounted for seven per cent of all vehicle sales — but it is rising. And Klippenstein said the federal rebate “has definitely increased sales in the past couple of months.”

Transport Canada reports that more than 14,000 electric cars and minivans were bought nationwide using the rebate since May 1. The department, which is overseeing the rebate program, also said overall electric vehicle sales were up 30 per cent between January and June, compared to the year before.

But Klippenstein said there is one caveat to the data. More than eight in 10 of the electric vehicles sold in May and June, were sold in British Columbia and Quebec. Those are the only two provinces that have a provincial rebate — Ontario did until last year when Premier Doug Ford cancelled it after being elected — and both allow their rebate to be combined with the federal one for even greater savings.

Even more important to the sales distribution is that both B.C. and Quebec require dealerships to sell a certain percentage of electric cars, Klippenstein said. If they don’t meet the quotas they have to either pay a fine or buy credits from competitors who exceeded their quotas.

Klippenstein said there is still a limited supply of electric cars and those the automakers are sending to Canada are going to B.C. and Quebec first to make sure dealerships hit their quotas.

Dan Woynillowicz, policy director at Clean Energy Canada, said there is still work to do to install public charging stations in the provinces that have never had a rebate. The lack of that infrastructure is contributing to lower sales there.

Transport Canada hasn’t yet been able to provide further details about what kinds of cars were the most popular purchases or sales numbers by province.