Manitoba Election Campaign All But Official as Parties Make Promises 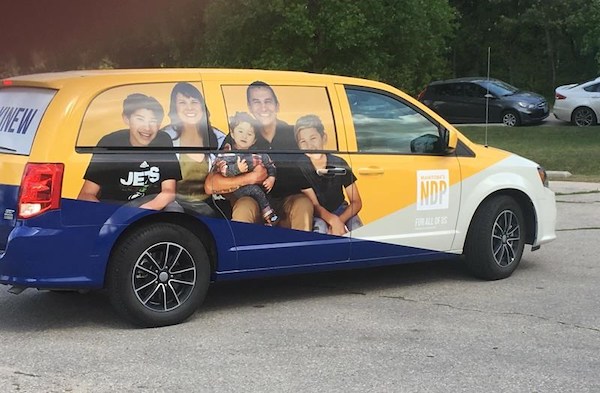 WINNIPEG — Manitoba’s provincial election campaign is not officially underway, but the two main parties kicked their electoral machines into gear Wednesday with promises on health care and addiction treatment.

Opposition NDP Leader Wab Kinew revealed his campaign van for the Sept. 10 election — a yellow and blue vehicle featuring a large picture of him, his wife and three children.

Kinew promised to reverse some of the changes the Progressive Conservative government has implemented at Winnipeg hospitals which have prompted criticism from heath care unions.

“The commitment that I’m making is to be responsible, to listen to the people on the front lines and to be smart about the changes that we need in health care, so we won’t be reversing all of the closures,” Kinew said.

The NDP were swept from office in 2016 by the Progressive Conservatives after raising taxes and running several consecutive deficits. The Tories, under Brian Pallister, won the biggest majority government in a century in Manitoba — 40 of the 57 legislature seats.

Since then, opinion polls suggest the Tories continue to lead province-wide but face a tighter race in Winnipeg, where most of the legislature seats are.

Winnipeg has also been the focal point of Pallister’s health care reforms. Three of the city’s six hospital emergency departments have been converted to urgent-care centres, which don’t handle life-threatening issues such as heart attacks.

Kinew said if he is elected premier, he would reverse two of the three closures. The third, at the Victoria General Hospital in the south end of the city, was completed long ago and would be hard to reverse, he said.

Kinew also promised to release a fully costed party platform to outline a plan to balance the budget by 2023 — the same time frame promised by Pallister.

Pallister focused on the rising use of methamphetamines Wednesday at a campaign-style announcement at an addictions treatment centre.

With his health, justice and family services ministers at his side, Pallister promised to set up a new detox centre that could handle up to 30 people at a time. He also promised more housing units for recovering addicts and easier ways for officials to seize the proceeds of drug crime.

“Our crime rate has gone up, the need for treatment services and supports has gone up, and the need to educate goes up too,” Pallister said, adding the promises would cost an estimated $20 million.

The provincial election was originally scheduled for October of next year, but Pallister started dropping hints last December that he was eyeing an early vote. He announced in June the election would be moved up to Sept. 10 of this year.

Provincial law dictates that election campaigns must be between 28 and 35 days, so Pallister will have to officially launch the election by next Tuesday at the latest.