It’s a Race to the Finish at Assiniboia Downs 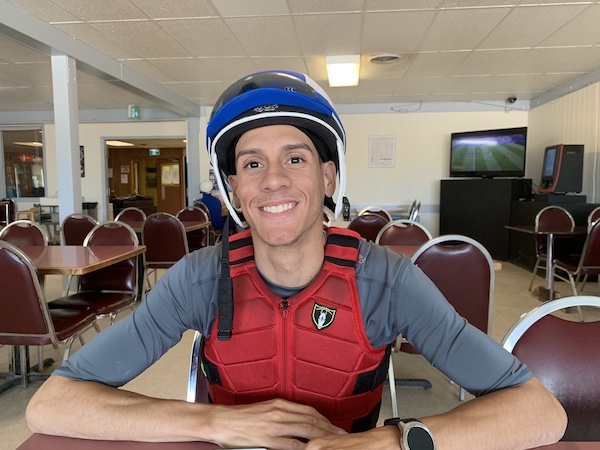 Jockey Alex Cruz is out for the season. (SCOTT TAYLOR PHOTO) 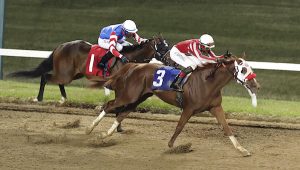 With only 14 race dates remaining at the 2019 Assiniboia Downs live racing meet, the jockey race has been thrown wide open.

Alex Cruz, who is still the leader heading into the weekend, is now out for the season with collarbone and rib injuries that he suffered during a morning workout last Thursday (before Manitoba Derby Weekend) when the horse he was working fell. Cruz attempted to ride last Friday night but booked off his mounts due to the pain. Trainer Juan Pablo Silva, who brought Cruz to Winnipeg from Turf Paradise said that Cruz won’t ride again until October when the Turf Paradise meet gets underway in Phoenix.

That means, of course, that defending champion Antonio Whitehall, the steadily improving Richard Mairs and red-hot Chavion Chow have been thrown into an extremely competitive race for the jockey title.

The race for the jockey title is now a legitimate race.

Things are just a little different on the trainer’s side of the ledger. Five-time champion Tom Gardipy Jr. has opened up a three-win lead in the trainer’s standings at ASD. Gardipy Jr. now leads all trainers’ with 36 wins, 33 seconds, 25 thirds and $330,219 in earnings in 172 starts. Juan Pablo Silva is now second with 33 wins, 29 seconds, 23 thirds and $337,827 in winnings in 152 starts while defending champion Jerry Gourneau is third with 31 wins, 37 seconds, 26 thirds and a Downs-leading $363,445 in winnings in 186 starts. Steven Gaskin is next with 18 wins while legend Gary Danelson, in his 60th year as a trainer, is next with 13 wins.

In the meantime, the Downs just completed one of its most successful Derby Weekends ever. The Derby itself was a thrilling race as Oil Money went wire-to-wire over a mile and an eighth for the win. Hidden Grace remained undefeated with her sixth straight Stakes win in the Debutante, Monday’s crowd was unmatched and the weekend handle was eye-popping.

“There was so much to be pleased with on what was one of the most successful Manitoba Derby days in recent memory,” said Downs CEO Darren Dunn. “From a big and competitive feature field that helped to create a large wagering handle of just under $600,000 to the massive crowd on hand that enjoyed a beautiful afternoon under crystal blue skies. It does not get any better than that.”

This weekend, the featured race goes Saturday night with the Buck Domino Overnight Stakes (at about 8 p.m.). It’s a mile and a 16th for $18,000 featuring two of the favourites at the Downs, Deep Explorer (1-1) and former Derby champion Plentiful (2-1). Deep Explorer, trained by Jerry Gourneau and ridden by Chavion Chow, won the R.J. Speers Stakes on June 29 and the Manitoba Mile on July 20. Plentiful, ridden by Tyrone Nelson and trained by Murray Duncan, was second in the Manitoba Mile but hasn’t won since the Monsson Rain Overnight Stakes one year ago.

Don’t forget, this Sunday, it’s the annual CTHS Yearling Sale behind the grandstand at Assiniboia Downs on the Red River Exhibition grounds. It’s free to enter and, who knows, you just might find yourself a future Stakes horse to purchase. As well, Sunday night, it’s the second Manitoba Night Market at the Downs from 3 p.m. to 11 p.m. Admission is $5

The post-parade on Friday and Saturday nights this week is at 7:15. The gate opens for the first time at 7:30.