Home » The Canadian Press » Bombers’ Bighill Says No Disrespect to Arbuckle, But Not Facing Mitchell is a Break

Bombers’ Bighill Says No Disrespect to Arbuckle, But Not Facing Mitchell is a Break 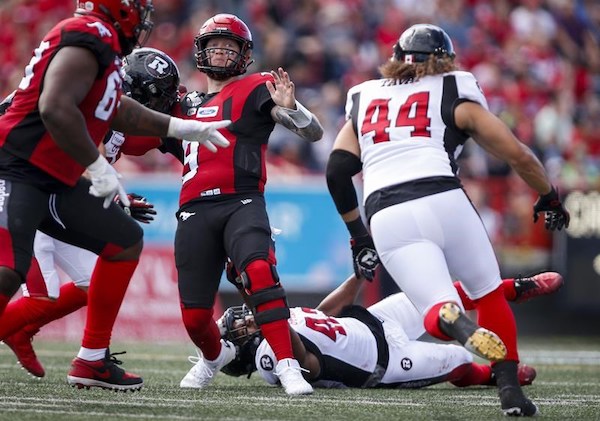 Despite Mitchell practising for the first time this week since his injury, it’ll be Nick Arbuckle behind centre again as the top two teams in the CFL West Division put their identical 5-2 records on the line in a Thursday clash in Winnipeg.

“Bo’s one of the best quarterbacks in this league, so any time you’re lined up against him you know you’re going to be in a battle for sure,” Bighill said after Winnipeg’s walk-through Wednesday.

“Not that Arbuckle can’t come out here and do his thing, too, and play good football, but I think if anyone would say who they’d want at quarterback right now, Bo Levi or Arbuckle, I think it’s an easy question.”

Mitchell tore a pectoral muscle in Week 3 and practised Tuesday for the first time since suffering the injury.

However, the 2018 CFL most outstanding player stays on the six-game injured list for a sixth game. That gives Calgary salary-cap relief for that entire stretch for its highest-paid player.

That factored into the decision, said Stampeders head coach Dave Dickenson, adding Mitchell was close to returning and he’s “pretty confident” he’ll be ready for the home game Aug. 17 against Montreal.

“I’m being a little cautious,” Dickenson said. “It’s just too short a week, too. I needed about two more practices and then I think I would have had a much tougher decision. But just one practice, I just didn’t think it was enough.

“I think physically he could do it, I just don’t think he’s ready. His feet, his eyes just need more time. And so if we’re not going to play him, then there’s no reason to just dress him as the third string and not get the salary-cap relief on the six game.”

Arbuckle, who’s 4-1 since taking over from Mitchell, wasn’t viewing the Winnipeg game as his possible last start this season.

“I haven’t really looked at it that way at all,” he said. “I’m just excited to be able to start again. When I was going into the season, I wasn’t expecting to start any games.”

Calgary is coming into the match on a three-game win streak, while Winnipeg has lost its last two outings.

“Whatever it is, for us it’s play a little bit better than we have the last couple of weeks and try to find ways to score more points and come out with the win,” Nichols said.

“This is obviously a tough team we’re playing against, statistically one of the best defences in the league. For us, as an offence, it’s being extremely focused in on what we’re doing, what our job is and making sure we execute for four quarters.”

Winnipeg receiver Chris Matthews, who won the Grey Cup with Calgary last season, dismissed any added significance to the tilt between the division’s top squads.

“I really don’t care what the rankings are,” Matthews said. “For me, as long as we’re where we need to be when playoff time comes, and that’s hitting on all cylinders and making sure we go out there and give it all we got, that’s what I’m worried about.”

TEAMS OF THIEVES: Calgary and Winnipeg are tops in the league for forcing turnovers. The Stampeders are No. 1 with 22 takeaways, the Bombers second with 20. Calgary’s scored 74 points off the turnovers compared to Winnipeg’s 34.

WIN STREAK ON THE LINE: The Bombers have won six straight games at home, the longest streak since a seven-game run in 2002-03.

TOP PICKS: The game features Stampeders defensive back Tre Roberson and Bombers DB Winston Rose, who are tied for most interceptions this season with five picks each through seven games.