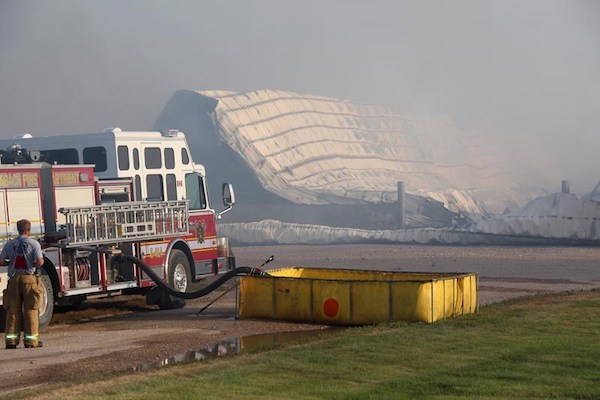 The aftermath of a dairy farm fire is shown northeast of Steinbach, Man. on Monday, Aug.12, 2019 in a handout photo. (THE CANADIAN PRESS/HO-Steinbachonline)

STEINBACH, Man. — Hundreds of cattle have been killed in a fire that destroyed a large dairy complex in southeastern Manitoba.

The fire broke out sometime before 5 a.m. Monday at the four-barn Pennwood Dairy, northeast of Steinbach.

Kelvin Toews, the community’s fire chief, said there were about 1,000 animals in the barns and about 200 survived.

The fire chief said three barns were on fire when crews arrived and the fourth was in flames soon after.

He said an unknown number of people were involved in milking operations in the buildings at the time, but they all got out safely.

Crews from six fire departments fought for hours to control the flames that belched clouds of thick, black smoke across a wide area.

The fire is believed to have started in one of the four metal-clad buildings that were linked to each other.

A damage estimate was not immediately available and investigators from the provincial fire commissioner’s office arrived at the scene later Monday.

Toews said emergency crews would probably be at the scene most of the day for mop-up purposes.

“It’s a tin barn so we have to peel it back and get to the fire. There’s some silage piles on fire, too.”

The fire came as Pennwood Dairy was preparing to expand its herd to about 1,700 cattle. (CHSM)

← Previous: Waverley Underpass Prepares to Open as Traffic Shifts from Temporary Roadway Next: A List of 10 Constituencies That Should Provide Interesting Races in Manitoba →
Tags: Animals | Fire | Manitoba | Steinbach