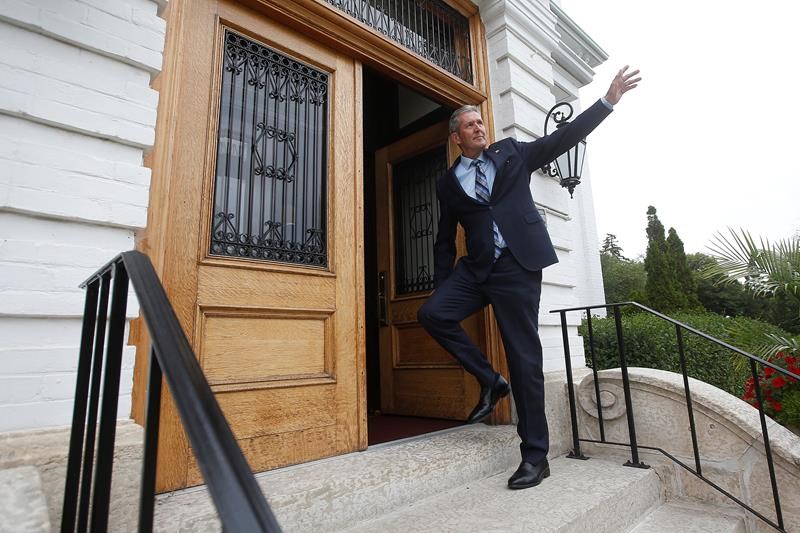 Manitoba Premier Brian Pallister waves as he enters the Lieutenant Governor’s home to drop the writ calling for a September election in Winnipeg Monday, August 12, 2019. (THE CANADIAN PRESS/John Woods)

Pallister visited the lieutenant-governor on Monday to start a 29-day campaign that will culminate with the vote on Sept. 10.

The election was to be held Oct. 6, 2020, but earlier this years Pallister moved up the date by more than a year. He said at the time that his Tories had fulfilled most of their promises from the last election and needed a new mandate from voters.

“The progress we have made has not always been easy — I know that and Manitobans know it too — but it takes time to change things for the better,” Pallister said outside the legislature, many of his party’s candidates at his side.

“I want to say thank you to everyone … who has helped to change things for the better, but there is still much more to do.”

The Tories won the largest majority in Manitoba in a century in the 2016 election when they nabbed 40 of 57 legislature seats.

Royce Koop, head of the political studies department at the University of Manitoba, said it will be an uphill battle for opposition parties to topple the Tories, who continue to lead in opinion polls and have raised exponentially more money.

“We’re not starting with an evenly matched race. It’s not like the … contenders are equal in the polls,” Koop said.

“That said, the campaign is just starting and we have an idea of what the terms of the campaign are going to look like.”

The Tories swept the NDP from power in the last election after the New Democrats raised the provincial sales tax and started running a string of deficits.

Pallister’s government recently reversed that tax increase and has cut the deficit. The Tories are trying to focus the campaign on “trust and taxes,” Pallister said recently.

The New Democrats are raising health care as a main issue. Pallister called the early election in the midst of hospital reforms in Winnipeg. Three of the city’s emergency departments are being downgraded into urgent care centres, which do not handle life-threatening concerns such as heart attacks.

The NDP won 14 seats in the last election and later elected Wab Kinew as leader. Kinew has been the subject of Tory attack ads over old criminal convictions, for which he has since received record suspensions, and for an accusation that he assaulted a former girlfriend. That charge was stayed by the Crown in 2004, although the woman has maintained her accusation that Kinew threw her across the couple’s living room.

The Liberals, who held four seats when the election was called, have struggled to raise money and get candidates in place. As of Monday, they had nominated people in just over half the constituencies.

The Green party is hoping to score its first seat in Manitoba after coming close in the Winnipeg seat of Wolseley in 2016.

← Previous: A List of 10 Constituencies That Should Provide Interesting Races in Manitoba Next: Police Trying to Identify Man in Surveillance Video at The Forks →
Tags: Brian Pallister | Conservative Party | Manitoba | Manitoba Election 2019 | Winnipeg