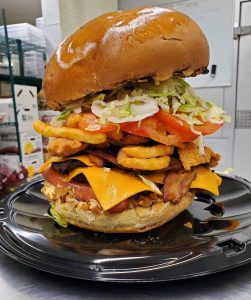 Gluttony is alive and well at IG Field as the Winnipeg Blue Bombers introduced a new burger on Wednesday.

Called the Walby Burger — after former Blue Bombers’ offensive tackle Chris Walby (1981–1996) — the six-patty burger (yes, six!) should be enough to feed your entire game day crew, and then some.

What makes up the five-pound Walby Burger? Well, let’s just say a nap might be in order if you’re able to devour the entire thing.

Sounds like an early contender for Le Burger Week (September 1-7).

The Walby Burger will be available for $45 plus tax beginning Thursday night when the Blue Bombers host the B.C. Lions. Kickoff is at 7:30 p.m.