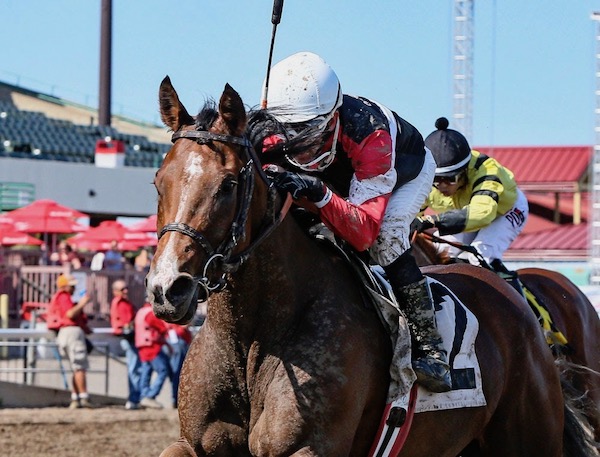 The greatest Manitoba-bred filly/mare in history will go to post about 4:10 p.m. in the $200,000 Lady Jacqueline Stakes at Thistledown Racino just southeast of Cleveland. She’s the 2-1 morning-line favourite, will start out of the No. 1 hole and she’ll run a mile and an eighth. Once again, Tyler Baze will ride.

The No. 2 favourite is Mylady Curlin (3-1), a Kentucky-bred four-year-old filly ridden by Shaun Bridgmohan. Mylady Curlin won her last four races including a Grade 3 stakes at Pimlico in Baltimore. Escape Clause was second in her last race, finishing behind Breeder’s Cup favourite Elate in the Grade 2 $700,000 Delaware Handicap.

With a win on Saturday, Escape Clause will surpass $1 million in earnings. She’s currently at $836,500 in her four-year career. This year, in six starts, she’s had two wins and two seconds and won $473,000. Owned by trainer Don Schnell, Barry Arnason and True North and bred by Cam Ziprick and Arnason Farms in Russell, Man., Escape Clause will be sold on Monday, Nov. 4, at Fasig-Tipton’s Night of the Stars sale in Lexington, Kentucky. Meanwhile, her one-year-old sister will be sold at the September Keeneland Sale on Saturday, Sept. 4.

Don’t forget, if Escape Clause wins, it will be Crazy Hour in the Clubhouse with beer, wine and shots at $2.95 plus half-price appetizers.

Meanwhile, it’s another fun weekend coming up at Assiniboia Downs. On Friday night, it’s the $30,000 Phil Kives Stakes featuring local favourite Langara at 1-2. Langara is ridden by Antonio Whitehall and trained by Michael Nault. However, watch out for up-and-coming three-year-old gelding Purrsibility at 3-1. Trained by Jerry Gourneau and ridden by Chavion Chow, Purrsibility won an allowance race on August 2, and looked good doing it. He’s won three races this summer and could give Langara a battle.

On Saturday night, it’s the $30,000 Distaff Stakes featuring Hidden Grace. Hidden Grace, who just happens to be Escape Clause’s sister, has won all six races in which she’s entered. All six were Stakes races and the last was the Manitoba Oaks on August 2. It would appear she is now turning into Escape Clause, at least here at ASD. On Saturday night, she’ll be in a tiny four-horse field (only the brave, cocky or crazy will race against her) and will go off as the 1-9 morning-line favourite.

There is also some outstanding simulcast racing to wager on at the Downs this weekend. Besides the Lady Jacqueline Stakes featuring Escape Clause on Saturday, there is also the Breeder’s Stakes, the third jewel in the Canadian Triple Crown on the turf at Woodbine. And on Sunday, there is the $250,000 Canadian Derby at Century Mile in Edmonton.

Live racing goes to post both Friday and Saturday night at 7:30 p.m. The opening post-parade each night is at 7:15.