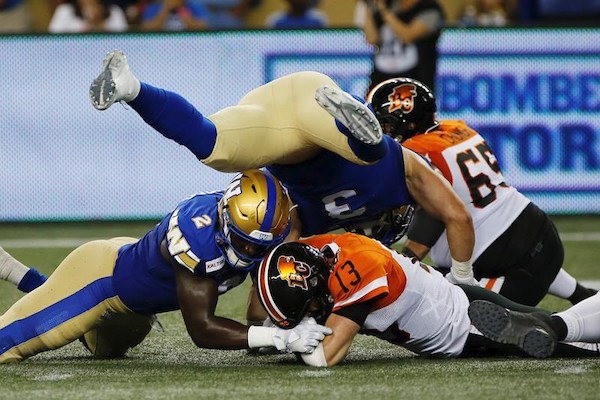 BC Lions quarterback Mike Reilly (13) recovers his fumble before Winnipeg Blue Bombers’ Jonathan Kongbo (2) could get to it during the second half of CFL action in Winnipeg Thursday, August 15, 2019. (THE CANADIAN PRESS/John Woods)

WINNIPEG — Andrew Harris doesn’t like to focus on his personal accomplishments, but he couldn’t help being affected by his move up in the CFL record book Thursday.

The Blue Bombers running back became the all-time leader among Canadian players for yards from scrimmage and also made it into the league’s top 10 all-time rushing list as Winnipeg remained in first place in the West Division by beating the B.C. Lions 32-16.

However, the victory ended with a question mark after Bombers quarterback Matt Nichols left with an apparent injury to his right throwing arm in the fourth quarter. Head coach Mike O’Shea had no update after the game.

Nichols was sacked by new Lions defensive lineman Shawn Lemon with about nine minutes left in the fourth. He fumbled the ball and right away walked to the dressing room appearing to favour his arm.

“He’s a soldier and he battles so hard and I’m just hoping and praying he’s OK,” Harris said of Nichols.

Harris passed former Montreal receiver Ben Cahoon (13,368 yards) to become the all-time leader among Canadian players for yards from scrimmage. He finished with 73 yards rushing, but had no receiving yards. His career total is 13,377.

The Winnipeg native also moved past Dave Thelen (8,463 yards) into the league’s top 10 all-time rushing list with the 14 carries for 73 yards that gave him 8,477 career yards.

“I was trying to downplay it, but I got pretty emotional when I saw that little video and everyone started congratulating me,” Harris said.

“He’s a great guy, man,” he said. “He works extremely hard. He deserves everything he’s gotten and will get in the future.”

The Bombers improved their record to 7-2 with their fifth straight victory at IG Field this season in front of 24,914 fans. It also extended a home win streak to eight games since last season, the most victories on home turf since 10 in a row in 1993 and ’94.

The Lions dropped to 1-8 with their fifth straight loss, the first time they’ve started off with that mark since 1996.

Nic Demski caught a five-yard touchdown pass for Winnipeg, Nichols ran one yard into the end zone and defensive back Marcus Sayles blocked a Josh Bartel punt and ran nine yards for a TD.

Bombers kicker Justin Medlock booted field goals of 25, 37 and 53 yards and hit the left upright on a 45-yard attempt. His three converts increased his streak to 90 consecutive from 32 yards out.

B.C. running back John White rushed for a four-yard touchdown. Sergio Castillo hit field goals from 35, 50 and 47 yards and made one convert. The Lions also conceded a safety.

Demski’s TD catch at 4:47 of the first quarter was aided by B.C. penalties for pass interference and illegal contact on a receiver.

After Nichols connected with Matthews for a 51-yard reception, the Bombers settled for Medlock’s 25-yarder to up the score 10-0 at 9:22.

Nichols also completed a 53-yard pass to Demski, but the drive was snuffed out with an interception when receiver Drew Wolitarsky bobbled the ball and Lions linebacker Maleki Harris grabbed it. B.C. used the turnover for Castillo’s 35-yarder at 6:24.

Bombers backup pivot Chris Streveler was also intercepted by Junior Luke. That turnover led to Castillo’s 50-yarder to make it 10-6 at 9:47. The Lions conceded a safety with 21 seconds left in the first half.

B.C. opened the third quarter with a trick play. Receiver Duron Carter threw a 56-yard pass to Lamar Durant, igniting a drive that ended with White’s TD run at 2:04 and a convert that gave B.C. its only lead of the game.

“We’ve got to get it together,” Carter said. “No ifs, ands or buts about it. There’s no excuses.”

Medlock made a 37-yarder and Winnipeg regained a 15-13 lead. Defensive end Willie Jefferson then intercepted Reilly and the turnover was capped off with Nichols’s one-yard TD run at 10:44, the convert and a 22-13 Winnipeg lead.

Sayles’ blocked punt for a TD at 12:33 widened the gap 29-13. Medlock and Castillo traded field goals in the fourth quarter.

← Previous: Is 'Ass' Too Crass? Opinions in Manitoba's Political Class Are at an Impasse Next: 'Nothing Has Changed:' Tina Fontaine's Body Pulled from River Five Years Ago →
Tags: CFL | Football | IG Field | Winnipeg Blue Bombers