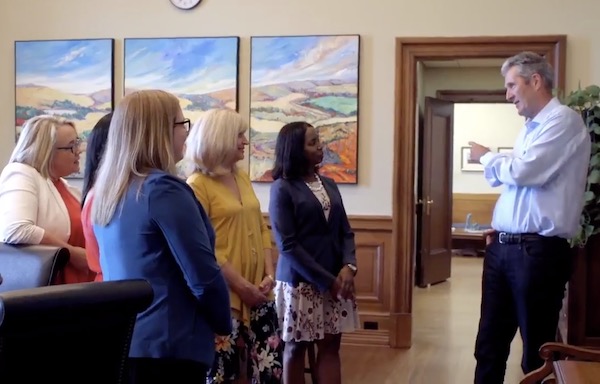 Brian Pallister appears in the premier’s office with PC Party candidates in one of his party’s campaign videos. (PC PARTY OF MANITOBA)

WINNIPEG — An investigation has been opened into Brian Pallister and his Progressive Conservative Party over an election advertisement.

Manitoba’s NDP filed a complaint with the province’s Commissioner of Elections over the use of the premier’s office to film an election campaign video.

“This is a serious abuse of power and government offices. Just like when his St. Vital candidate, Colleen Mayer, took illegal corporate donations from insurance brokers, Pallister thinks there’s one set of rules for him and his friends, and another set of rules for the rest of us,” said Mark Wasyliw, NDP candidate for Fort Garry.

The NDP says Pallister should apologize to Manitobans and pay back the province for misusing the premier’s office for a partisan video shoot.

The NDP pointed to when the Liberal Party of Canada reimbursed the House of Commons $500 earlier this year after the Prime Minister’s office was used in a party video.

Watch the video below: