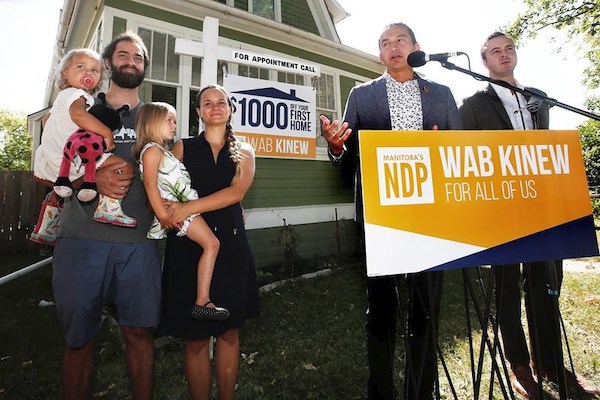 Wab Kinew, leader of the Manitoba NDP, centre, speaks during a press conference in Winnipeg Friday, August 16, 2019. As Ben and Carly Cressman, and their daughters Hannah, 2, and Stella, 3, and Adrien Sala, NDP candidate for St James, listen in, Kinew announced their party will provide funding for new home buyers if they are voted in at the September 10th election. (THE CANADIAN PRESS/John Woods)

WINNIPEG — Manitoba New Democrat Leader Wab Kinew promised new help for first-time home buyers Friday as he highlighted one of his candidates in an open suburban constituency — a move that has become common in the early days of the provincial election campaign.

Kinew said if elected premier Sept. 10, he would cut $1,000 off the land transfer tax for new home buyers and the disabled. He said it would help people deal with the sticker shock they can face when they become property owners.

“You’re saving every penny. You think you have got enough to buy your first home. And then — boom — you get hit with this whole other level of costs in the form of land transfer taxes and lawyer fees,” Kinew said.

The land transfer tax uses a sliding scale and is based on a property’s market value. The former NDP government increased the tax in 2004, and a Winnipeg realtor association has said the levy is among the highest in Canada. People buying a starter home worth $300,000 would currently pay $3,650.

The proposed tax break would help some 8,000 people and cost the provincial treasury $8 million each year, the NDP said.

Kinew made the announcement alongside Adrien Sala, the NDP candidate in the St. James seat in west Winnipeg. The seat was most recently held by Progressive Conservative Scott Johnston, who has moved to an adjacent constituency for this election.

Pallister made the announcement in the new McPhillips constituency, where some of the proposed schools would be, while standing next to Tory candidate Shannon Martin. Martin’s former Morris seat — outside of Winnipeg — was eliminated in recent boundary changes.

Suburban seats have proven to be the key to success for Manitoba political parties. Most rural areas consistently vote Progressive Conservative. Voters in Winnipeg’s core and the province’s north have pretty consistently elected New Democrats.

The seats in Winnipeg’s suburbs are the ones that change hands most frequently and are key battlegrounds.

Pallister was in Tory-leaning southwest Winnipeg Friday to promise more money for tourism, highways and the film industry as part of an economic platform.

Pallister said he would also speed up zoning and business permit approvals and expand broadband access in rural and northern areas.

“Our plan is focused on stimulating capital investments,” Pallister said.

The announcement had few details, other than a promise to increase the annual highways budget to $400 million from $350 million.

Liberal Leader Dougald Lamont promised Friday to create a $7-million annual fund to help communities with lead contamination in their soil. Lead has long been found in areas where there used to be heavy industry, and Lamont accused previous governments of being slow to act.

“The Manitoba government — whether NDP or PC — has been running tests, writing reports, finding lead and doing nothing,” Lamont said.

He made the announcement at a school where high lead levels have been found. The school, which is in the Notre Dame constituency in Winnipeg, has no incumbent following the recent boundary changes.

Lamont said the fund would cover testing for toxins, education about safe-handling practices and grants to remediate the soil.