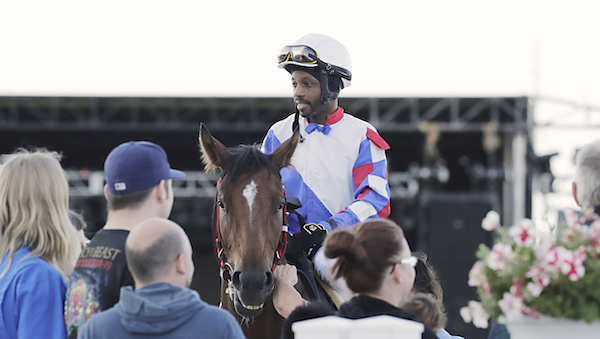 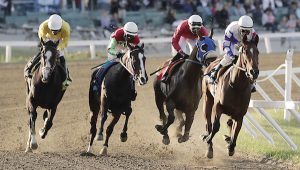 On a day when her older sister didn’t have her best, Assiniboia Downs’ newest star remained perfect.

At Thistledown Racino south of Cleveland, Manitoba’s all-time most successful thoroughbred, Escape Clause, didn’t have anything left in the tank (over a mile and an eighth) at the end and finished third at the $200,000 Lady Jacqueline Stakes. By finishing in the money, Escape Clause, the Cam Ziprick/Arnason Farms-bred five-year-old mare, won $20,000 and has now earned $856,500 in her career — $493,000 this year – and remains the highest-earning Manitoba-bred in history.

However, back home in Winnipeg, Escape Clause’s baby sister, Hidden Grace, had an easy time winning the $30,000 Distaff Stakes over one mile and has now won all seven races in which she’s been entered.

On Saturday night at Assiniboia Downs, Hidden Grace, with jockey Renaldo Cumberbatch in the irons, opened a short, clear lead into the first turn, set a nice easy pace and then opened up in the final turn and won by three and a half lengths over Queen Jean. Hidden Grace had plenty left at the end. A heavy 1-9 favourite, she paid $2.10 across the board in a tiny, four-horse field.

As a two-year-old, Hidden Grace won the Debutante Stakes and the CTHS Sales Stakes. This year, as a three-year-old, she has won the Hazel Wright Sire Stakes, the Chantilly, the R.C. Anderson Stakes, the Manitoba Oaks and now the Distaff. She has now won $96,291 in Manitoba and it’s hard to imagine she’ll be kept around Assiniboia Downs much longer. Saturday night’s four-horse field is a clear suggestion that nobody else really wants to race against her. There is simply not enough competition or money at the Downs to keep her in Manitoba.

While it was a big weekend for Hidden Grace and her owners, Barry Arnason, Charles Fouillard and Cam Ziprick, it was also a big weekend for jockey Richard Mairs. Mairs won five times on Friday and jumped into a huge lead in the jockey standings with only nine race days remaining in the 50-day meet.

Mairs now has 42 wins, 32 seconds, 32 thirds and $410,828 in earnings on 193 starts. Defending jockey champion Antonio Whitehall, who won twice this weekend and was in the money seven times in 12 starts, is next with 37 wins, 35 seconds, 38 thirds and a Downs-leading $479,342 in earnings in 204 starts while Alex Cruz, who came back from a painful collarbone injury on Friday night, started four races and rode two second-place finishers (he was supposed to be out for the season), is third with 34 wins, 31 seconds, 19 thirds and $320,666 in earnings on 136 mounts. Renaldo Cumberbatch, who won three times on the weekend, is next with 31 wins while Chavion Chow has 27 and Kayla Pizarro has 20.

There are three race nights at Assiniboia Downs this week. The first post parade on Wednesday, Friday and Saturday is 7:15 p.m.

And don’t forget, this afternoon and tonight, it’s Summer of Sound at Assiniboia Downs. The stage is up and looks great as some of the finest electronic dance artists on the planet will be featured. The lineup includes Galantis, Frank Walker, Yellow Claw, Gryffin and Crankdat. Available general admission tickets start at $98. The show starts at 3 p.m.