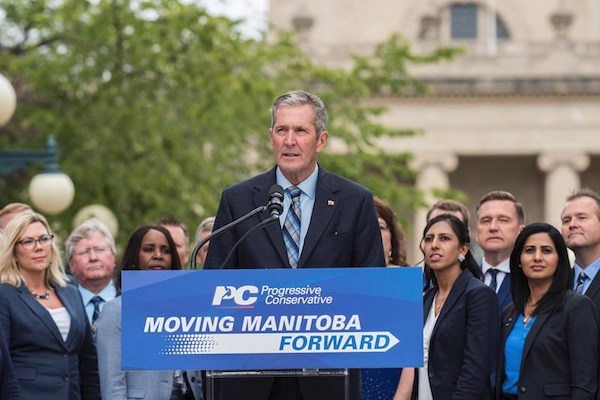 The Tories, if re-elected Sept. 10, would move on recommendations from the Manitoba Police Commission that has been asked to examine the possible benefits of increased foot patrols, more security cameras and beefed-up enforcement of anti-panhandling bylaws, Pallister said.

“Over the last decade, crime in downtown Winnipeg is keeping too many Manitoba families away, and it’s making those who work and live here feel unsafe,” he said.

Winnipeg police Chief Danny Smyth highlighted a rising crime rate last month and cited what he called a crisis in the growing use of methamphetamines.

The New Democrats do not have specific promises on crime or public safety in their campaign platform released earlier this month, but have many promises focused on treating addiction.

NDP Leader Wab Kinew reiterated Monday an earlier promise that, if elected premier, he would open a safe consumption site in downtown Winnipeg — something the Tories have vehemently opposed.

“Whether we like it or not, some folks in the community will continue to use substances,” Kinew said.

“And so long as that is happening in our backyards, we have a moral responsibility to use harm-reduction techniques to keep them and other community members safe.”

A safe consumption site would result in fewer needles in public places, reduce the spread of disease via needle-sharing and cut crime by giving addicts support, Kinew added.

An NDP government would also set up a meth intervention program at a downtown shelter and a new live-in program for people addicted to alcohol, he said. He said the meth problem has grown rapidly because the Tories have failed to react.

The Tories promised earlier in the campaign to set up a new detox facility, housing for people in recovery from addiction, and new drop-in centres for those seeking help. But a safe consumption site for meth is out of the question, the Tories said.

“The NDP are ignoring the advice of addictions experts and Winnipeg’s police chief, who have correctly noted that there is no such thing as a safe injection site for meth,” Cameron Friesen, the province’s health minister seeking re-election, said in a written statement Monday.

Friesen also pointed to media reports in Calgary that have cited a rise in crime in the area around a recent safe injection site.

The Liberals focused their campaign Monday on child care.

“Many parents face waiting lists for child care so long that they would need to put a name on a waiting list well before their child is born,” Lamont said in a news release.

The Liberals are also promising that they would boost funding to child-care centres to ensure workers were well-paid and to help improve literacy among young children. The total cost would be $33 million a year, Lamont said.