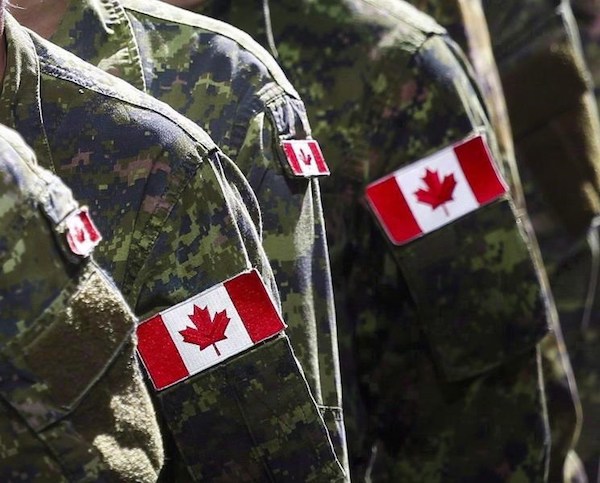 Members of the Canadian Armed Forces march during the Calgary Stampede parade in Calgary on July 8, 2016. (THE CANADIAN PRESS/Jeff McIntosh)

WINNIPEG — The commander of the Canadian Army says the military will take action if an investigation finds that a reserve member in Manitoba participated in a hate group.

Master Cpl. Patrik Mathews, who joined the reserves in 2010, is a combat engineer with 38 Canadian Brigade Group in Winnipeg.

Lt.-Gen. Wayne Eyre said in Ottawa that he wouldn’t be discussing any individual cases, but did say that service members are expected to adhere to a high level of behaviour.

“Those that do not embrace those values, those who do not protect those values, have no place in this organization,” he said Tuesday.

The Department of National Defence said in a statement that Mathews has not been on any deployments.

It said the military was aware of “possible racist extremist activities” by a Canadian Armed Forces member in Manitoba prior to recent media coverage and was already investigating.

The allegations came to light after a story by an undercover reporter from the Winnipeg Free Press identified Mathews as being involved in the group.

The Free Press said Mathews would not comment on the allegation when approached outside his home Tuesday.

Brigade commander Col. Gwen Bourque said Mathews last worked with the unit in May and was to return in September.

“We are currently assessing what his employment is going to look like in September,” Bourque said in a teleconference.

“We were not aware of any possible racist, extremist activities.”

Bourque said the public shouldn’t jump to any conclusions.

“We also need to be very cognizant of due process. No military charges have been laid or have ever been laid against him, so there should not be any assumption of guilt at this time.”

Manitoba Mounties said they searched a residence in Beausejour, Man., on Monday night and seized a number of firearms.

An RCMP official said an investigation was ongoing and no one was in custody.

Eyre said disciplinary and administrative action can be taken against reservists, even for actions when they’re out of uniform, if it “reflects badly” on the Canadian Forces.

He said he doesn’t believe extreme views among members is widespread.

“Do I believe in my heart that this is systemic? Absolutely not. But when it comes to our attention that there are those who have views that are not aligned with our values we’re going to act.”

Sailors associated with the Proud Boys disrupted a Mi’kmaq ceremony in Halifax in 2017. There have also been media reports of other members associating with neo-Nazi groups such as the Atomwaffen Division.

A military intelligence report last year said officials were aware of 30 active service members who were part of a hate group or had made statements that were discriminatory or racist.

— By Bill Graveland in Calgary.