Home » Sports » Antonio Whitehall Has Work to Do

Antonio Whitehall Has Work to Do 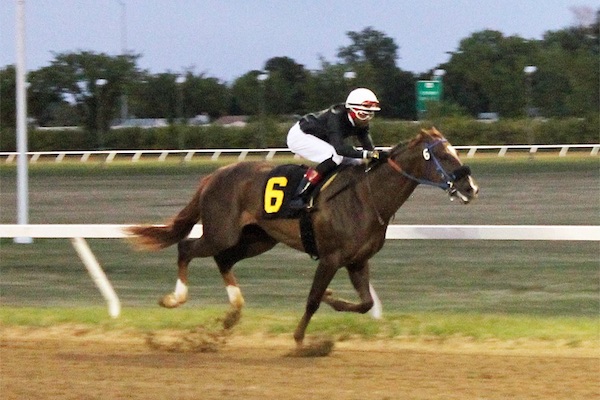 Cash or Card wins the 56th running of the Osiris Stakes. (ASSINIBOIA DOWNS)

Antonio Whitehall guided Shelley Brown’s Cash or Card home in the 56th running of the $30,000 Osiris Stakes on Wednesday night.

Still, the defending jockey champion at Assiniboia Downs has a lot of work to do over the final nine days of live racing this season if he wants to retain his title.

Although he still leads all other jocks in winnings this summer with a whopping $501,282 in purses, Whitehall still trails Richard Mairs in wins. Mairs has won 42 races to Whitehall’s 38.

For Whitehall, the 25-year-old from Bridgetown, Barbados, who first came to Winnipeg in 2016, Assiniboia Downs is like home. He’s well-liked, he gets great mounts and he’s made so many friends, he feels like he’s been here all his life.

“I love it here,” he said earlier this season. “That’s why I come back every year. People treat you good here and they give you a chance. I’m committed, dedicated and motivated.”

On Wednesday night, in the 5 ½-furlong sprint, Whitehall did a great job with the two-year-old, Cash or Card. The young gelding had speed outside, opened up down the stretch and held on easily to win by two lengths over Mairs and Be My Macho Man. The third-place finisher was Rollin Sevens, ridden by Tyrone Nelson. Cash or Cards trainer is Shelley Brown and her ownership partners are Larry Falloon and Oslen Belle.

For Whitehall, who continues to win stakes races, this year could produce more victories and yet not produce a championship. Last summer, Whitehall won the jockey championship with 41 wins, 51 second-place finishes and 45 thirds in 250 races. He earned $361,213 for his owners. This year, Mairs already has 42 wins so if Whitehall intends to repeat as Downs champion, he has to get on his horse, as they say.

Whitehall started riding dressage horses and showjumpers at 15. It wasn’t long before he found himself at Garrison Savannah Racetrack, the only track on the island of Barbados, riding thoroughbreds.

“I started out exercising horses in dressage and show jumping, but by the time I was 16, I had progressed to horse racing,” he said. “It wasn’t long before I won champion apprentice in back-to-back years in 2012 and 2013. I could have won champion apprentice and champion jockey in 2013 but I was tied with another rider for wins so in Barbados, to break the tie, they go to second-place finishes and he had one more than me. It was that close.”

Now, he’s in a close race again, this one with a 32-year-old veteran jock named Mairs who was a former champion apprentice in Jamaica and is having the best year of the four that he’s been riding at Assiniboia Downs.

Mairs, who didn’t have a winner on Wednesday, but finished second three times in six races, now has 42 wins, 35 seconds, 32 thirds and $421,468 in earnings on 199 starts. Whitehall, who won the Osiris, is next with 38 wins, 36 seconds, 38 thirds and a Downs-leading $501,282 in earnings in 210 starts while Alex Cruz, who is trying to come back from a painful collarbone injury (he was supposed to be out for the season) and rode twice on Wednesday night, is third with 34 wins, 31 seconds, 19 thirds and $321,196 in earnings on 138 mounts. Renaldo Cumberbatch is next with 32 wins while Chavion Chow has 28 and Kayla Pizarro has 21. All three each won a race on Wednesday night.

The toughest part for Whitehall right now is that he’s running out of racing days. There is no more Wednesday night racing this season and after this weekend’s two cards, there will only be six more days of live racing – Aug. 30, 31 and Sept. 1 and Sept. 6, 7 and 8.

There are a pair of race nights this weekend at Assiniboia Downs. The first post parade on Friday and Saturday is 7:15 p.m. On Saturday, it’s the $30,000 CTHS Sales Stakes featuring the most exciting up-and-coming two-year-olds on the grounds, including the morning-line favourite at 8-5 Ultimate Candy with Mairs aboard, Kayla’s Thunder (3-1) with Arthur Budhu in the irons and Esther’s Quest (7-2) with Whitehall. Should be a terrific seven-horse field.