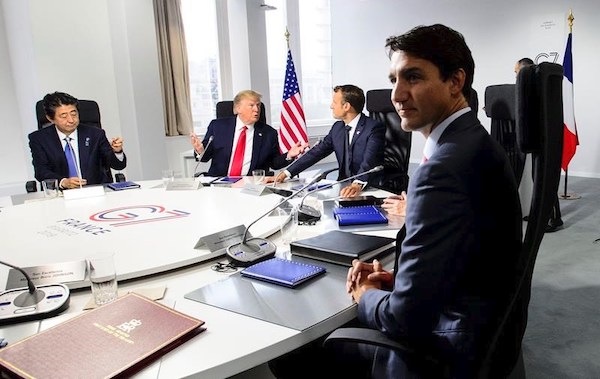 BIARRITZ, France — The federal government is spending $15 million and offering up the use of Canadian water bombers to help fight the wildfires currently ravaging the Amazon rainforest, Prime Minister Justin Trudeau said Monday as he wrapped up several days of meetings with G7 world leaders in France.

Canada is also reaching out to the government of Brazil to see what else it can do to help douse the flames, which Trudeau described as a symptom of an escalating climate crisis — one that evoked a separate US$20-million commitment from the G7, part of which will be earmarked for a long-term global initiative to protect the rainforest.

The picture of Trump’s empty chair — his team was in the room and the U.S. president agreed with the shared goal of the Brazil package, said French President Emmanuel Macron — symbolized the president’s disdain for environmental causes, and served a convenient talking point for Trudeau as he heads into an election campaign next month where climate change is sure to be a hot topic.

Trump has made his perspective on climate change very clear, while the Liberals believe climate change is a real and existential threat for the planet, Trudeau said, citing his government’s carbon tax measures, as well as plans to phase out coal and plastics.

“Canada has been unequivocal in its leadership on that, understanding that you cannot have a plan for the future of the economy unless you also have a plan to fight climate change,” he said.

“Now, the president and even some Conservative politicians at home seem to disagree with us on that, but I’m very much looking forward to the election in which we get to have this conversation with Canadians.”

The money the G7 nations put forward for the Amazon will be aimed specifically at Brazil, Bolivia, Peru and Paraguay, said Chilean President Sebastian Pinera, with urgent brigades to combat fires and specialized planes.

“The second stage is more long-term and will require the consent of the countries involved,” Pinera added, outlining not only a plan for reforestation of those parts of the basin ravaged by the flames, but also a plan to guard the biodiversity of the region.

“It would, of course, always respect their sovereignty,” he said. “We think we have to protect these real lungs of our world.”

Brazilian President Jair Bolsonaro, a populist, far-right leader, initially dismissed the hundreds of blazes and then questioned whether activist groups might have started the fires in an effort to damage the credibility of his government, which has called for looser environmental regulations in the world’s largest rainforest to spur development.

In response, European leaders threatened to block a major trade deal with Brazil that would benefit the very agricultural interests accused of driving deforestation.

Thousands of people have demonstrated in cities across Brazil and outside Brazilian embassies around the world. #PrayforAmazonia became a worldwide trending topic. Pope Francis added his voice to the chorus of concern, warning that the “lung of forest is vital for our planet.”

Bolsonaro finally took a less confrontational approach Friday and announced he would send 44,000 soldiers to help battle the blazes, which mostly seem to be charring land deforested, perhaps illegally, for farming and ranching rather than burning through stands of trees.

Satellites have recorded more than 41,000 fires in the Amazon region so far this year, with more than half of those coming this month alone. When asked why the G7 nations only put together a US$20 million fund, Trudeau said he couldn’t speak for his fellow leaders.

Still, Trump and Macron sounded notes of unity as the annual gathering wrapped up Monday, a different tone from that which marked the end of last year’s meeting in Charlevoix, Que.

Trump departed that summit amid a storm of angry tweets aimed directly at Trudeau, last year’s host, and demanded his name stricken from the shared communique. This time, leaders opted instead for a short, single page of statements about the economy, Iran and Hong Kong, among other global hotspots.

“We actually had a very good meeting,” Trump said at a press conference of his own.

“I had it out with one or two people where we disagreed in terms of concept, but we actually had a pretty good meeting last year. I would say that this was a big step above in terms of unity, in terms of agreement. We have really great agreement on a lot of important subjects, but last year was good also.”

He added: “Last year might have been a little bit underrated.”

But Trump made clear he wasn’t about to halt his push to unleash his country’s natural resources, adding he wasn’t going to give up on that wealth “on dreams, on windmills.” He was, however, less clear about his priorities for the G7 next year, when the United States takes the helm of the group just as Trump heads into his own re-election bid.

Trump said he would be willing to invite Russia to attend next year’s summit, despite it having been booted from the group in 2014 over its annexation of Crimea.

Canada isn’t interested in seeing Russia re-admitted to the group, but wouldn’t boycott the meeting if Russian President Vladimir Putin attended as a guest of Trump, Trudeau said.