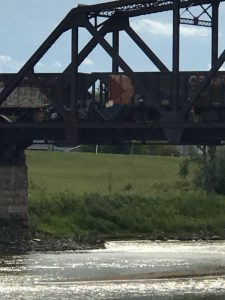 A witness on scene snapped this photo, showing the pickup truck wedged between the train and the railway bridge above the Assiniboine River. (SUBMITTED)

Two people were killed Monday afternoon when their pickup truck was hit by a train on Roblin Boulevard.

The crash happened at around 4:20 p.m. when a northbound train was travelling on Roblin between Alboro Street and Highway 334. The impact pushed the eastbound truck onto the CP train bridge over the Assiniboine River.

The Winnipeg Paramedic and Fire Service Water Rescue Unit was on scene as a precaution for the rescue workers who walked onto the bridge.

A 75-year-old man and his 65-year-old female passenger, both from the RM of Headingley, were pronounced deceased on scene.