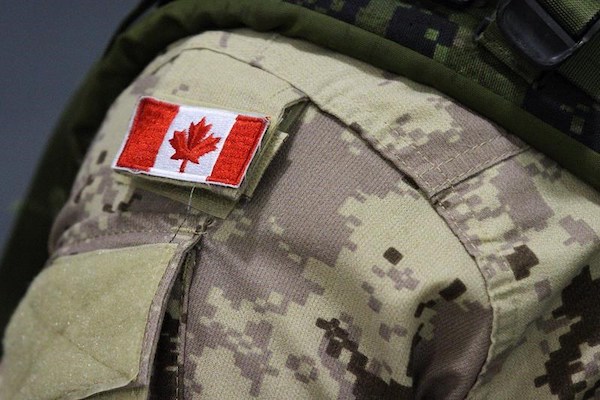 A Canadian flag is shown on the uniform of a member of the military in Trenton, Ont., on Thursday, Oct. 16, 2014. (THE CANADIAN PRESS/Lars Hagberg)

OTTAWA — The Canadian military is relieving a Manitoba army reservist of his duties and speeding up his request to leave the Armed Forces following allegations he is a member of a neo-Nazi group.

Master Cpl. Patrik Mathews will no longer participate in military activities in any form or return to work and will officially leave the Forces in the coming weeks, the Department of National Defence said in a statement.

“This action was deemed necessary considering the seriousness of the allegations and the risk to unit morale and cohesion,” the department said in a statement.

Mathews has also turned in his military uniform.

The combat engineer with the 38 Canadian Brigade Group in Winnipeg came into the spotlight last week after a Winnipeg Free Press story linked him to a neo-Nazi called the Base, further inflaming ongoing concerns about the presence of hate groups and right-wing extremists in the military.

Chief of the defence staff Gen. Jonathan Vance told reporters last week that the military “did not miss” Mathews’s alleged links to neo-Nazism as his commanding officers had first started looking into the matter back in April.

“It is incumbent of our leaders to know their soldiers, and to take measures when they have acted in a manner that is not aligned with our beliefs and culture of respect for all people,” she said in an email.

“We have taken decisive action, and we will continue to exert full energy in removing those from our ranks who harbour extremist ideologies.”

The RCMP are reportedly conducting their own investigation, but have only said that they raided a house in Beausejour, Man., last week and seized a number of weapons.

Mathews has not been arrested or charged with any crime.

One such incident saw sailors associated with the Proud Boys disrupt a Mi’kmaq ceremony in Halifax in 2017. There have also been media reports of other members associating with neo-Nazi groups such as the Atomwaffen Division.

A military intelligence report last year also said officials were aware of 30 active service members who were part of a hate group or had made statements that were discriminatory or racist.