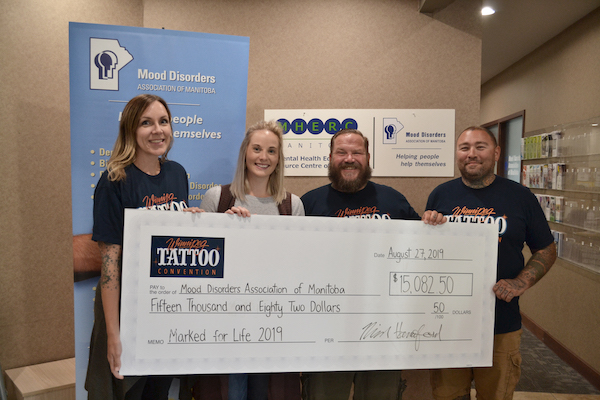 Rachel Westman of the Mood Disorders Association of Manitoba (second from left) accepts a cheque from Amie Lesyk, Rich Handford and Mike Morfoot of the Winnipeg Tattoo Convention. (HANDOUT)

The Mood Disorders Association of Manitoba was handed a hefty cheque Tuesday in the sum of $15,082.

The cash came from the third annual Winnipeg Tattoo Convention, which was held in Winnipeg August 16-18.

A majority of the funds were raised at the convention’s Marked for Life tattoo fundraiser booth, where visitors could get tattooed with all proceeds going MDAM. The rest came from the MDAM’s daily 50/50 contests.

“We are excited to continue to grow this fundraiser, with the support of volunteering artists and convention goers, and give back to a vital organization making a difference in our province,” said Rich Handford, Winnipeg Tattoo Convention event coordinator.

Thirty-two volunteer tattoo artists from Winnipeg and around the world donated their time to complete 75 tattoos at the charitable booth.

More than $42,000 has since been raised for the association since the convention began in 2017.