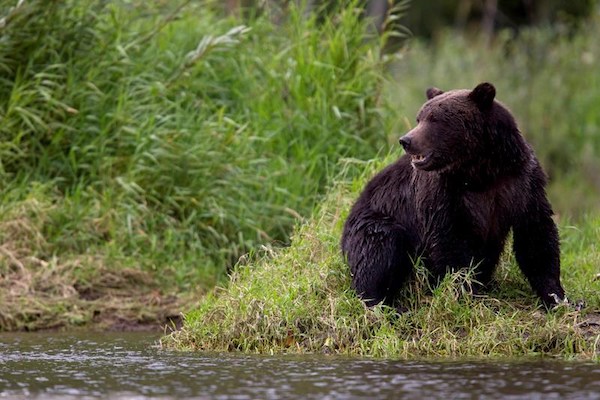 A grizzly bear is seen fishing along a river in Tweedsmuir Provincial Park near Bella Coola, B.C. Friday, Sept 10, 2010. (THE CANADIAN PRESS/Jonathan Hayward)

VICTORIA — Feeding a Timbit and hot dogs to a bear has resulted in a $2,000 fine in British Columbia.

The province’s conservation officer service says the man was also ordered to keep a distance of at least 50 metres from bears for six months by a provincial court judge on Aug. 22.

The service says in a tweet the man, whose name was not released, pleaded guilty to a charge of unlawfully feeding bears.

The man posted a photo on social media of himself feeding the Tim Hortons treat to the bear from a vehicle on the side of the Alaska Highway.

Shawn Brinsky, acting inspector for the conservation officer service in the Peace region, says charges were stayed by the Crown against a woman who faced the same allegations.

He says officers never found the young grizzly, but they’ve seen numerous examples where aggressive bears expect to be fed again, including a tourist who received a deep bite on her hand while taking a photo from her vehicle.

“We’ve had in the past a number of incidences where tourists, highway travellers and highway workers, where they’ve had some pretty risky and close encounters by bears,” he said Wednesday.

He said when bears gets conditioned to receive food from people driving along a highway, both the bears and those who feed them are in danger.