Bitcoin ATMs around Winnipeg have been affected by the scam. (File Photo)

The scam involves posters that are placed near Bitcoin ATMs, stating the ATM is “in the development of new software.” The poster advises clients not purchase or deposit bitcoin into their own wallet. Instead, the client should deposit bitcoins through a QR code on the poster.

While they’re purchasing Bitcoin with their own money, the cryptocurrency is going to someone else. Since the transaction is untraceable, clients can’t recover their funds. 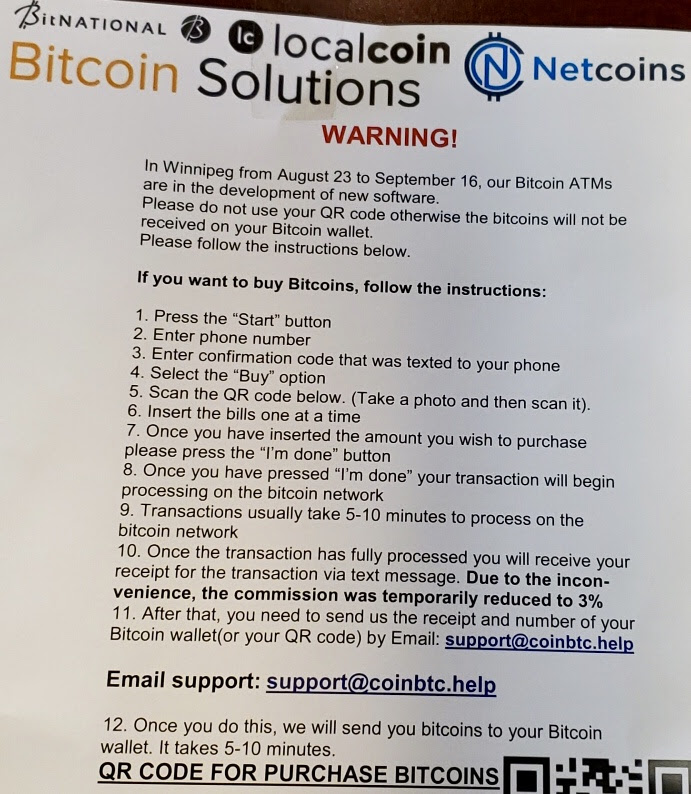 The poster from a Winnipeg Bitcoin ATM (WPS / Handout)

According to the investigators, the owners and operators of the affected Bitcoin ATMs aren’t responsible for the posters.

Investigators recommend clients familiarize themselves with cryptocurrency processes. Bitcoin wallet transactions should be between someone you’re familiar with. Clients shouldn’t send bitcoins for outstanding bills through a Bitcoin ATM.

Government agencies, such as the Canadian Revenue Agency, Manitoba Hydro, Bell MTS, the Winnipeg Police, and all banks and credit unions do not accept Bitcoin as payment.