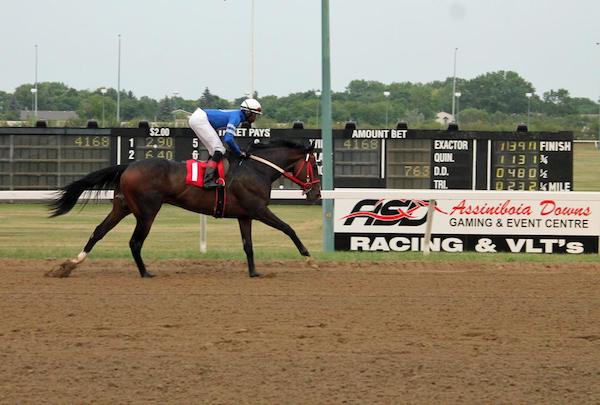 Langara, with Antonio Whitehall in the saddle, enter in the Gold Cup. (ASSINIBOIA DOWNS)

For many people, it’s Labour Day Weekend. For those headed out to Assiniboia Downs, it’s Gold Cup Weekend.

The $30,000 Gold Cup, featuring the best older horses at Assiniboia Downs, is a one-mile and one-eighth test to determine ASD’s year-end champion. It will go to post Labour Day Monday afternoon at about 4:15 p.m. and feature eight outstanding horses.

The morning-line favourite at 2-1 is Gem Alta, sipped into Winnipeg by Alberta trainer Tim Rycroft. The Kentucky-bred four-year-old gelding won the Fred Jones Handicap on June 30 at Century Mile in Edmonton and just finished fourth in the $75,000 Century Mile Handicap on Aug. 18. Prayven Badrie will ride Gem Alta on Monday.

He’ll be challenged by Murray Duncan’s Plentiful (5-2), a five-year-old Kentucky-bred gelding just won the $18,000 Buck Domino Overnight Stakes on Aug. 10 and has won nine times in 37 starts at ASD, Oaklawn, Churchill Downs, Ellis Park and Hawthorne. Plentiful finished second in the 2017 and 2018 Gold Cup races and was the 2017 Golden Boy Stakes and Manitoba Derby champion at ASD. Plentiful will be ridden by Tyrone Nelson.

As well, look for Deep Explorer at 3-1. The six-year-old Kentucky-bred gelding, trained by Jerry Gourneau and ridden by Chavion Chow has two wins in six starts at Assiniboia Downs this year. He won the Manitoba Mile on July 20 and the R.J. Speers Stakes on June 29. He was second to Plentiful in the Buck Domino Overnight Stakes on Aug. 10.

The field will be rounded out by two Juan Pablo Silva entries: Crown the Kitten (9-2) with Alex Cruz aboard and Point Guard (25-1) with Stanley Chadee Jr. up; two Steven Gaskin entries: Three-year-old Manitoba Derby entry Moscow Minister (20-1) with Richard Mairs aboard and Telling You twice (10-1) with Ronald Ali in the irons; and trainer Michael Nault’s popular Langara (15-1) with Antonio Whitehall in the saddle.

Crown the Kitten is a $10,000 California that won his last race at Del Mar on July 8 while Point Guard won a claiming race at Assiniboia Downs on Aug. 23. Point Guard arrived in Winnipeg earlier this summer after racing at Santa Anita where he won twice and finished in the money four times in seven starts.

Langara, who has won twice in four starts at the Downs this summer, has won the last two Phil Kives Stakes, most recently on Aug. 16.

Moscow Minister, the youngest horse in the race finished fifth in this year’s Manitoba Derby after racing three times at Churchill Downs this summer.

It should be a tremendous race that will go hand-in-hand with the splendid jockeys’ and trainers’ competitions at ASD.

There are five days of live racing remaining at the Downs this summer. Saturday at 7:30 and Monday at 1:30 and then Friday and Saturday next week at 7:30 and next Sunday at 1:30. That will bring to a close Winnipeg’s 50-day thoroughbred meet.