PCs Peg Campaign Promises at $856M; NDP Say It Will Result in Cuts 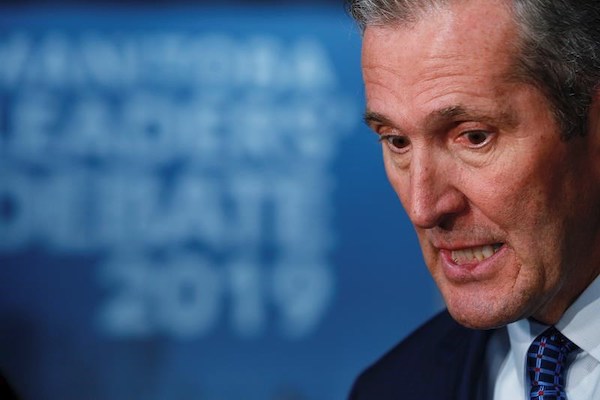 Progressive Conservative Party of Manitoba and Premier Brian Pallister, at a leaders’ debate at CBC in Winnipeg, Wednesday, August 28, 2019. (THE CANADIAN PRESS/John Woods)

WINNIPEG — The Progressive Conservatives pegged the cost of their campaign commitments Tuesday at $856 million while leader Brian Pallister knocked his knuckles on a dinner table and repeated his rallying cry of lower taxes and more money in people’s pocketbooks.

“The money on this table belongs to Manitobans,” he said as he also announced he would phase out a complicated education property tax if the Tories were to be re-elected next week.

Lowering taxes has been a central pillar of the party’s platform, but the New Democrats and Manitoba Liberals say there would be a serious cost.

The PCs say a good portion of the money to pay for their promises — $325 million — would come out of savings from a fund meant to find efficiencies in government. Modernizing how projects were procured and the sale of unusable land and property would be expected to amount to another $400 million.

The Tories would also aim to reduce senior management in government organizations by 15 per cent for another $31 million in savings.

NDP Leader Wab Kinew suggested that the result would be cuts to essential services.

“The thing is with Mr. Pallister it doesn’t matter where the idea comes from, it always results in a cut to health care or education,” Kinew said.

Pallister said he wouldn’t tackle the education portion of property taxes until after 2022-23. His goal would be to have the budget balanced by then. But he said it would take 10 years before the tax was eliminated, at which point a Winnipeg homeowner could expect to save $2,000 a year.

“Manitobans work hard for their money and Manitobans deserve to have the chance to decide how to shape their financial future with more of it,” he said.

The education part of property tax bills brings in about $800 million each year for the province.

Pallister’s other tax promises include no longer taxing home and rental insurance and removing the provincial sales tax from costly haircuts and other personal care services. He has pledged the PCs would eliminate probate fees and the provincial levy on wills and tax form preparations.

The Tories returned the PST to seven per cent from eight per cent as of July 1 to fulfil their biggest promise from the 2016 campaign. The former NDP government had raised it in 2013.

Promising to find efficiencies to pay for tax cuts and election promises will speak to the Tory base, said Paul Thomas, a political analyst at the University of Manitoba. While the numbers may be lacking in details, Thomas said, many PC supporters believe the party will keep its promises.

“This Progressive Conservative government was elected really on issues regarding deficit slaying without cutting front-line workers and rolling back the PST,” he said. “It really does fit within their approach.”

Manitoba Liberal Leader Dougald Lamont called for an independent tax review and suggested the tax cuts will be divvied out unfairly.

“This money has to come from somewhere else,” he said.

Also on Tuesday, Lamont promised to invest in 24-hour safe spaces for children, people experiencing domestic violence and the homeless needing somewhere warm to stay in the winter.

Kinew promised to reinstate a special drugs program which would cover medication costs for about 1,100 Manitobans with life-threatening illnesses. He also said he would freeze the rate of pharmacare deductibles.