Home » The Canadian Press » B.C. Mother Who Smothered Daughter Must Wait 15 Years Before Applying for Parole

B.C. Mother Who Smothered Daughter Must Wait 15 Years Before Applying for Parole 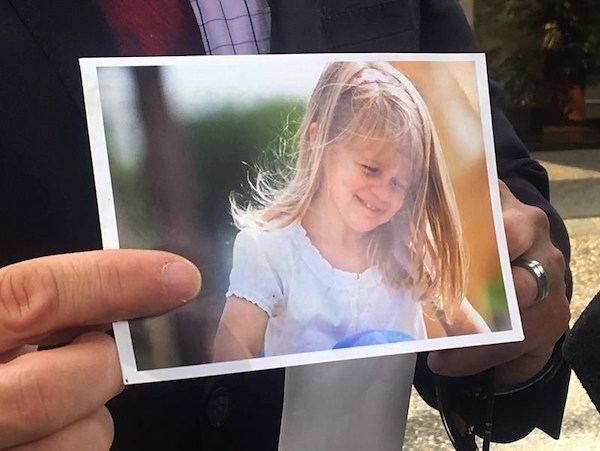 Gabe Batstone holds a photo of his daughter Teagan outside of New Westminster Law Courts on Wednesday, June 12, 2019. (THE CANADIAN PRESS/Laura Kane)

NEW WESTMINSTER, B.C. — A British Columbia mother who killed her eight-year-old daughter in a “selfish” and “deliberate” act meant to hurt her ex-husband has been sentenced to life in prison without the chance of parole for 15 years.

Lisa Batstone planned to kill herself and didn’t want the girl’s father to have custody of their daughter Teagan, so she decided to smother her with a plastic bag on Dec. 10, 2014, Justice Catherine Murray told B.C. Supreme Court.

The mother, then 41, held the bag over the sleeping girl’s mouth and nose for four to five minutes, before sitting near her daughter’s lifeless body, drinking wine and writing notes that blamed her ex-husband Gabe Batstone, the judge said.

“The killing was intentional. It involved choices and decisions. It involved effort. Ms. Batstone’s actions were purposeful and goal-directed. She never wavered from that goal,” Murray told the court on Tuesday in New Westminster, B.C.

Batstone placed multiple notes around her townhouse, with two visible as soon as anyone entered the home: “You broke me,” and “You win, Gabe.”

She then tried to suffocate herself by wrapping two plastic bags around her head and securing them with duct tape, but she couldn’t go through with it, Murray said.

Instead, Batstone sent an email to her daughter’s school saying Teagan had the flu, before texting some people “I’m sorry,” and sending accusatory messages to members of her church whom she felt had “shunned” her recently.

When a concerned church member knocked on her door, Batstone didn’t answer and waited for the woman to leave before loading Teagan’s body into the trunk of her car and driving away, the judge said.

She apparently planned to drop her dog at a sitter and go somewhere to commit suicide, but her car got stuck in a ditch. Batstone told a nearby resident to call 911 and first responders found her cradling Teagan’s body in the trunk.

“Ms. Batstone told everyone she came into contact with from that point forward that Gabe was a psychopath, that he destroyed her, that she wanted to die and that she had killed Teagan to protect her from Gabe,” Murray said.

However, the judge found that the mother used Teagan as a “pawn” to exact revenge against her ex-husband because she never came to terms with the collapse of her marriage in 2010.

The judge also said that although Batstone was likely suffering from depression, anxiety and borderline personality disorder at the time, her mental issues did not significantly diminish her moral culpability.

She told several lies to psychiatrists because she hoped to be found not criminally responsible due to a mental disorder, Murray noted.

Batstone’s breach of her daughter’s trust could not be more abhorrent, the judge added.

“That a parent could kill her own child rocks the foundation of societal values. When it is for a selfish reason, as it was here, it is all the more shocking.”

Batstone sobbed in the prisoner’s box as Murray delivered her sentence.

Murray found Batstone guilty of second-degree murder earlier this year. The crime carries an automatic life sentence, and the Crown had requested 16 to 18 years without the chance of parole, while the defence asked for 10.

Gabe Batstone was unable to attend the sentencing but said when reached by phone at his home in Ottawa that 15 years was the bare minimum for which he and his family had been hoping.

At least his two sons with his new wife, Stephanie Batstone, will be adults by the time his ex-wife might be released, he said.

“As with all of these events, it always comes from such a place of sorrow. It’s hard to say there’s relief or joy. That can’t exist in this context,” he said.

He said he was encouraged that the judge saw through his ex-wife’s attempts to deflect blame for the crime. But at the same time, he said it always hurts to hear that the goal of the murder was to hurt him.

“It’s hard not to feel some element of guilt and remorse and sorrow that her life was taken because of you, even though you didn’t do anything.”