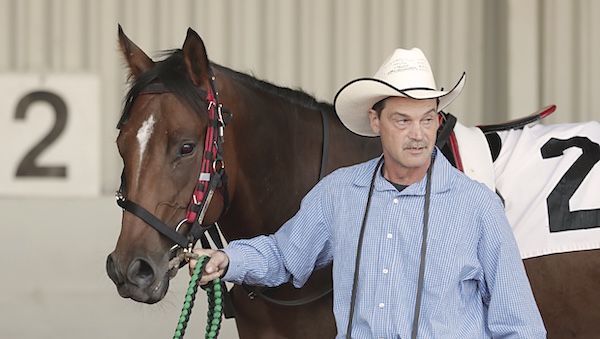 Hidden Grace will put her undefeated career back on the line on Friday night at Assiniboia Downs.

This time, she’ll take on the adults.

Manitoba’s Fabulous Filly — and the sister of Escape Clause, the only Manitoba-bred to come close to winning a million dollars racing — will go to post Friday night in the $30,000 Manitoba Matron, a one mile and one eighth route featuring the best older mares on the grounds.

Hidden Grace, who was won all seven of the races she’s entered, was bred and is owned by Cam Ziprick, Charles Fouillard and Barry Arnason; is trained by Michael Nault and is ridden by Renaldo Cumberbatch. She will go into the Matron as the 9-5 second favourite on the morning line.

However, she is a three-year-old running against some of the top mares in the region. The favourite in the race is five-year-old Manitoba-bred Tadaa at 3-5. Bred by Barry Arnason, trained by 82-year-old Gary Danelson and ridden by Dillon Khelawan, Tadaa is Hidden Grace’s older sister and she’s owned by Danelson and Arnason. Nice for Arnason who owns the Top 2 horses in the race.

In the meantime, the 50-day meet ends this weekend (only 27 more races) and it has been one of the most successful seasons in a decade. Attendance is way up, handle is up and with Escape Clause, Deep Explorer, Hidden Grace and Tadaa running to form all summer, the racing has been exciting. Escape Clause will run again on Saturday, September 14, in the $200,000 Grade III Locust Grove Stakes over one mile and one-sixteenth at legendary Churchill Downs in Louisville.

Perhaps the biggest winner of all this summer was local actor Curtis Markusson. Last Saturday night, he drew the ace of diamonds and won ASD’s 2019 Chase the Ace — and the $51,375 that came from selecting the right card. An avid golfer, he’s off to St. Andrews Scotland to play the Old Course with his buddies.

This weekend, the jockey and trainer champions will be crowned in a ceremony in the Winner’s Circle after the final race on Sunday. Five-time trainers’ champ Tom Gardipy Jr. has a four-win lead over Juan Pablo Silva although race might tighten up on Friday. Silva is sending two heavy favourites to post while Gardipy Jr. has only one. It looks like defending champion Jerry Gourneau, who still had a great year, will finish third.

For Mairs, who came to the Downs from his home in Jamaica four years ago, his success in 2019 has been all about hard work.

“I think maybe my success is due to the fact that it just might be my time,” he said. “But I’m a hard-worker and I’ve been doing this for a few years now. I’m here early every day and the owners and trainers really like my work ethic. I treat everyone with respect and I like to talk with everyone here. It doesn’t matter if you have 10 horses or two horses or 30 horses, I treat everyone respectfully.

“Because I have a good agent and I have been able to develop a good reputation, I’m getting more rides and better rides. It’s been better this year because my agent pointed out a couple of mistakes that I made a couple of years ago and I also got some very good advice from a trainer I ride for, Tom Gardipy Jr. So, I’ve been working on the advice they give me and I’ve eliminated the mistakes and people saw that I work hard and I got more and better rides.”

Friday and Saturday night racing starts at 7:30. On Sunday, Fan Appreciation. Day, the first post is slated for 1:30 p.m.