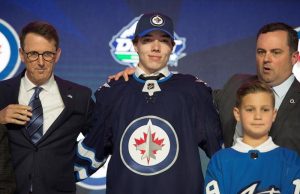 BELLEVILLE, Ont. — From the smaller NHL rinks to the passion of Canadian hockey fans, Winnipeg Jets prospect defenceman Ville Heinola has found a lot to like as he transitions to the North American game.

Having a couple of fellow Finns around doesn’t hurt either.

Speaking Friday ahead of the 2019 Rookie Showcase at Belleville’s CAA Arena, Heinola said teammates and countrymen like fellow defenceman Sami Niku and forward Patrik Laine have made him feel more at home since being in Canada.

“Yeah, I’m more comfortable with those players around,” Heinola said. “I can speak Finnish with them and that gives me something, they really help me out.”

The showcase features top prospects from the Jets, Montreal Canadiens and Ottawa Senators. He chose to play in the tournament as an opportunity to impress the Jets and get more familiarized with the team.

“Of course, I want to know more about this organization,” Heinola said. “I know what I need to do here and I think if I come back now and don’t make it after this, I’ll be more ready next year.”

The tournament is a way for Heinola to evaluate himself to see if he is ready to compete in the NHL he said. His goal is to make the roster for the upcoming season.

If he doesn’t make the Jets, he has options to either play for the American Hockey League’s Manitoba Moose or Lukko, his Finnish team.

“I don’t know yet, I’m just going to look and see what’s going to be best for me,” he said.

Heinola was selected 20th overall in the 2019 NHL draft by the Jets — who have a history of drafting and grooming Finnish players like Niku and Laine — and was the eighth defenceman taken.

Pascal Vincent, head coach of the Moose who is leading the Jets’ rookie team in Belleville, said Heinola has been fitting in well.

“He’s receptive and he’s listening quite a bit,” Vincent said. “He’s a defenceman, he’s a young player, we know he has a lot of talent, we know he’s a good player so I think he’ll be just fine.”

Heinola said has noticed the significant impact of hockey on Canadian culture during his transition from Finland to North America.

“Hockey is so much bigger here than it is in Finland,” he said. “It’s great to see everybody here is so interested in hockey.”

What’s more, Heinola believes his skills are more suited to the NHL’s rink size rather than larger European arenas.

“I think it fits better for me because I like to play fast games and I think my strengths are better in a smaller ice rink,” he said.

Vincent said this rookie tournament will be part of Heinola’s growth process.

“He’ll make mistakes, we’ll deal with that, we’ll teach that so long as he’s working hard,” Vincent said. “I want him to be confident, I want him to make plays. When there’s a play to be made, don’t force anything. I just want him to be himself.”

Heinola scored two goals and 12 assists in 34 games for Lukko in the 2018-2019 regular season and recorded one goal and three assists in the playoffs before his club was swept 4-0 by Tampereen Tappara in the second round.

He had one goal and three assists in five games to help Finland win gold at the 2019 world junior championship.