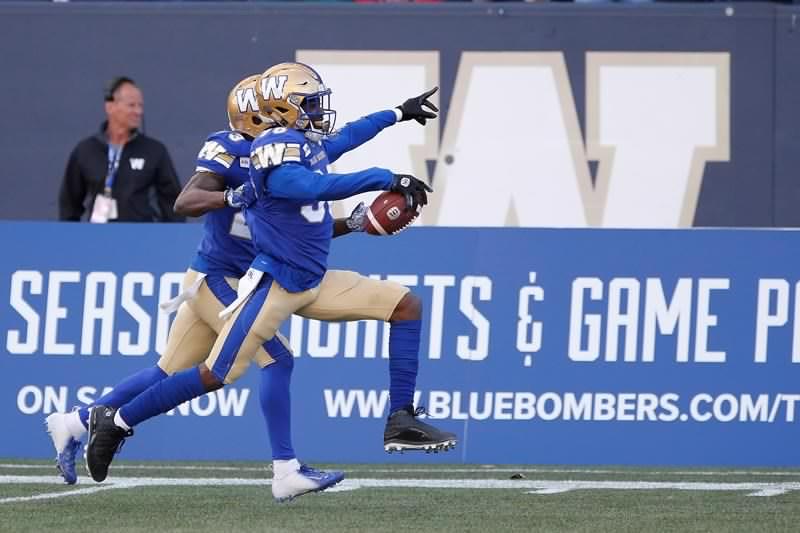 Winnipeg Blue Bombers’ Winston Rose (30) celebrates his interception of the pass intended for Saskatchewan Roughriders’ Shaq Evans (1) during the second half of CFL action in Winnipeg Saturday, September 7, 2019. (THE CANADIAN PRESS/John Woods)

WINNIPEG — Willie Jefferson didn’t want to break a promise to his mother.

When the Winnipeg Blue Bombers defensive lineman sacked Saskatchewan Roughriders quarterback Cody Fajardo on Saturday and forced a fumble, the six-foot-seven, 248-pound star did a backflip on the field.

“It’s the Banjo Bowl,” explained Jefferson, who did gymnastics at his Texas middle school and high school. “I knew a lot of people from back home would be watching and I promised my mom that if I got a strip sack I was going to do a backflip.”

Teammate Anthony Gaitor recovered the ball and the turnover led to another touchdown in Winnipeg’s 35-10 victory over the Roughriders in the 16th annual Banjo Bowl.

Chris Streveler ran for a pair of touchdowns and Janarion Grant took a punt 72 yards for a major as the Bombers stayed in top spot in the CFL West Division.

The victory halted Saskatchewan’s win streak at six games and gave Winnipeg its ninth straight victory at home, its longest since a 10-game run during the 1993 and ’94 seasons.

“Everything,” Fajardo said when asked what went wrong in the game. “They came in hungrier than us.

“We failed in all three phases of the game and they embarrassed us. I mean, that’s a very humbling feeling for us to come in here and just get our butts whipped. And there’s nothing else to be said other than that’s a great football team over there. We didn’t show up.”

The three-game season series between Winnipeg (9-3) and Saskatchewan (7-4) is tied. The squads face each other again on Oct. 5 in Regina.

Streveler, making his third straight start in place of injured quarterback Matt Nichols, was 15 for 21 passing for 186 yards with no interceptions. He rushed 11 times for 70 yards with the two TDs in front of a soldout crowd of 33,134 fans clad in Bombers blue and Riders green at IG Field.

“That’s about as good as it gets,” Streveler said. “We’re super happy with the way that we executed today.

“I know that there were some missed opportunities out there today, but I’m extremely happy with getting the win and the way that all three phases executed.”

The Bombers were also without running back Andrew Harris, who was serving his second game of a two-game suspension, as well as injured receivers Lucky Whitehead and Nic Demski and veteran long-snapper Chad Rempel. The team is on a bye next week.

“Guys keep going down and guys keep stepping up,” said Jefferson, who finished with two sacks, one forced fumble and three defensive tackles. “This game right here is a testament to how hard we, as an organization, we as a team, work during the week.”

Daniel Petermann had a five-yard catch in the end zone for Winnipeg and running back Johnny Augustine chalked up a 58-yard catch-and-run TD. Kicker Justin Medlock was good on five converts.

Saskatchewan, which beat Winnipeg 19-17 last weekend on a game-ending field goal, got its points off an eight-yard TD run by Fajardo, a 15-yard Brett Lauther field goal and an 63-yard punt single by Jon Ryan.

Fajardo completed 16-of-24 pass attempts for 196 yards with one interception. He was sacked four times.

“A little bit of everything, to be quite honest,” Saskatchewan head coach Craig Dickenson replied when he was asked what went wrong.

“That was just a really good ball club out there. They beat us across the board. I mean, I have to give them credit for being physical and just making plays.”

The Bombers had the game’s first possession and put up a 15-play, 97-yard touchdown drive that took 8:28. It was capped off with Streveler’s first TD plunge after Saskatchewan defensive back Ed Gainey was called for pass interference in the end zone while covering Darvin Adams.

The Riders went two and out on their first possession and settled for Lauther’s field goal on their second turn with the ball.

Grant notched his third TD from a punt return this season at 12:23 and Jefferson’s forced fumble led to Streveler’s second TD at 14:51.

Augustine’s TD was followed up by Ryan’s single and Fajardo’s TD with 25 seconds left in the third. A two-point convert attempt failed and Winnipeg led 35-10.

Bombers defensive back Winston Rose had his league-leading eighth interception of the season with 6:39 left in the fourth quarter.

Isaac Harker replaced Fajardo with just over three minutes remaining in the game and got sacked on third and five for a turnover on downs.