Another Banner Season at Assiniboia Downs 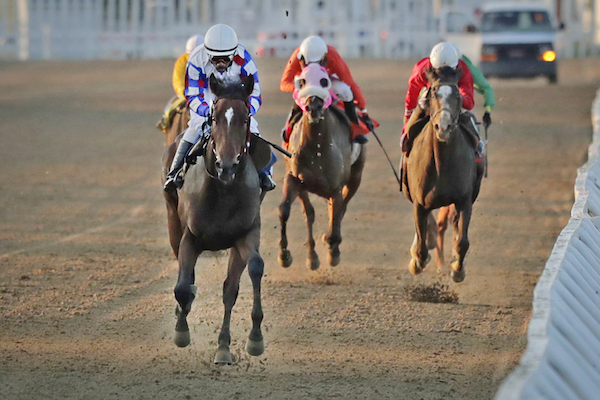 Richard Mairs won his first jockey championship while Tom Gardipy Jr. grabbed his sixth trainers’ title as the final day of racing at Assiniboia Downs wrapped up with an awards ceremony over the weekend.

Mairs finished the 50-day meet at the Downs with 52 wins, six more than 2018 champion Antonio Whitehall and 12 more than Alex Cruz, a veteran jock who overcame a serious shoulder injury in his first year at ASD to remain in the Top 3. Renaldo Cumberbatch was fourth with 36 wins while was fifth Chavion Chow was fifth with 34. Whitehall led all jockeys in earnings with $572,371.

Gardipy Jr. finished with 48 wins to take the trainers’ championship. Huan Pablo Silva was second with 42 while 2018 champion Jerry Gourneau had 39. Gourneau was the big money winner with $481,703 in winnings.

Meanwhile, for the Downs, the entire season was the best in recent history.

“Never has the spotlight been wider or brighter on Manitoba horse racing and breeding than this year,” said Downs CEO Darren Dunn. “That point was brought home on the final weekend of live racing when a Manitoba-bred three-year-old filly named Hidden Grace won her eighth race in a row, all stakes races, and is being taken out on the road to see if she can follow in the hoofprints of her sister, the mighty Manitoba mare, Escape Clause, who has earned more than $1 million while hitting tracks throughout the U.S.

“From the surprising and untimely passing of 12-time leading trainer Ardell Sayler to Oil Money wiring the Manitoba Derby field to the emergence of star filly Hidden Grace and even the eye-popping Chase the Ace payout that topped $50,000 in our first year with that promotion, this season was rich with stories. And to the many people who joined us from within and outside the province, I can’t say thanks enough.”

Here were the highlights:
• Wagering on the 50-day season was $35,622 per race compared to $33,997 last year, an increase of 4.78 per cent. This included partner wagering from other racing venues in North America which carried Assiniboia Downs races.
• On the final day of racing, the red-hot two-year-old, Cash Or Card won the Winnipeg Futurity in a milestone 90th running of the storied race.
• The Manitoba breeders of Escape Clause, Cam Ziprick and Barry Arnason, were honoured this past Saturday in Lexington, Kentucky as Canadian Breeders of the Year by the Thoroughbred Owners and Breeders Association. That comes just two years after the same award was presented to the stable run by the late Phil “As Seen on TV” Kives. One of the horses he bred, Daddy’s Daughter, won a stakes race in England earlier this year after being sold there for $387,000, the most ever paid for a Manitoba-bred horse.
• Added to that has been the prodigious production in Kentucky of talented babies by Goldencents whose mother was bred on the Kives farm.
Meanwhile, the story of the meet was Hidden Grace. Owned by Barry Arnason, Charles Fouillard and Cam Ziprick, trained by Michael Nault and ridden by Chavion. Chow, Hidden Grace has now won all eight races in her career and all have been Stakes races. She won the Debutante Stakes and the CTHS Sales Stakes as a two-year-old and then this year won the Hazel Wright Sire Stakes (June 8), the Chantilly Stakes (June 21), the R.C. Anderson Stakes (July 13), the Manitoba Oaks (Aug. 2), the Distaff (Aug. 17) and now the Manitoba Matron (Sept. 6).

Hidden Grace has now won $110,169 in her career and a whopping $83,144 all at Assiniboia Downs this summer alone. There is very little doubt that she will be the 2019 Horse of the Year.
“She’s freaky good,” said Chow, in a written statement from the Downs, after Hidden Grace won the $30,000 Manitoba Matron on Friday night. “She knows when to go slow and when to go fast. I just hang on.”

“Which puts her in the same category as Escape Clause, the 5-year-old mare who has created fans throughout the U.S. because of her modest beginnings in a place few had heard of — Russell, Man.,” said Dunn. “She has beaten some of the best female horses on the continent. Escape Clause and Hidden Grace have the same father, Going Commando.

“With the conclusion of live racing on Sunday, fans can continue to follow Escape Clause in a $200,000 U.S. race this Saturday at Churchill Downs while Hidden Grace will be putting her unbeaten record on the line at Century Downs near Calgary.”

Also, the third and final Manitoba Night Market and Festival will be held this Saturday at the Downs from 3 p.m. to 11 p.m.