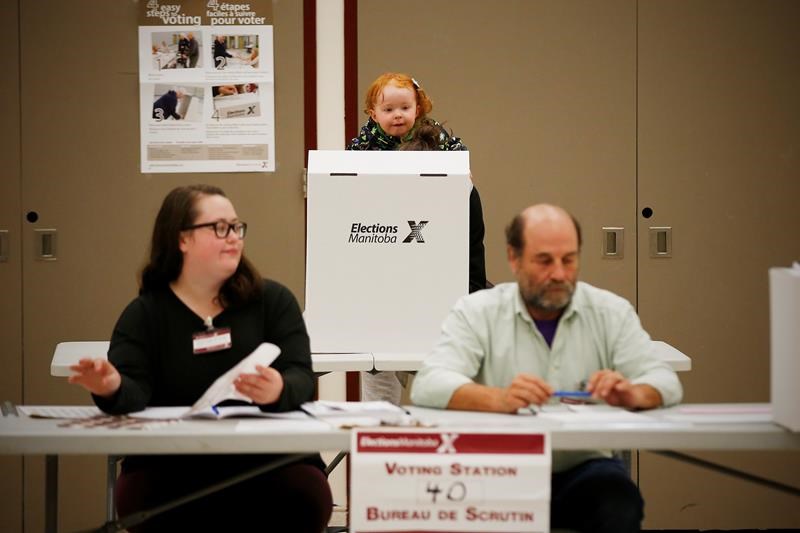 Two-year-old Juniper Martens looks over the voting booth from her baby carrier as her mother Melissa votes and Manitobans head to the polls on election day in Winnipeg, Tuesday, September 10, 2019. (THE CANADIAN PRESS/John Woods)

WINNIPEG — A light drizzle fell across parts of southern Manitoba Tuesday as polls opened for a provincial election that will determine whether the Progressive Conservatives get a second mandate for cost-cutting and tax reductions.

After a four-week summertime campaign that offered few surprises and did not garner much public attention, all parties were working to get their supporters to the polls.

“Our work is done, now it’s up to the people of Manitoba to make their choice,” NDP Leader Wab Kinew said outside the legislature.

Liberal Leader Dougald Lamont said he was spending most of the day getting out the vote, but hoped to take a short break.

“I was supposed to go for a walk with my mom and our dogs, just relax a little,” he said.

Pallister’s Tories won 40 of 57 seats, the largest majority government in Manitoba in a century, in 2016 after the former NDP government raised the provincial sales tax and angered voters.

Pallister reversed the tax increase in July and launched the election campaign a month later, more than a year ahead of schedule.

The Tories also fulfilled an election promise to reduce annual deficits, which had grown under the previous government, but the fiscal restraint has stirred up controversy.

Subsidies for everything from public housing to sleep apnea machines to physiotherapy have been cut. Three hospital emergency departments in Winnipeg have been downgraded and no longer handle life-threatening cases such as heart attacks.

Opinion polls have consistently suggested a sizable lead for the Tories provincewide, but also suggest a tight race with the NDP in Winnipeg, where most of the seats are. The New Democrats have focused on Pallister’s health-care reforms throughout the campaign and have promised to reverse some of the changes.

The same opinion polls have suggested the election is a contest between two leaders who are not popular on a personal level. Pallister has been criticized for the five or so weeks he spends each year at his vacation home in Costa Rica and for making unscripted remarks, such as when he warned of a possible “race war” over Indigenous spotlight-hunting at night.

Kinew has come under scrutiny over criminal charges that included two counts of assaulting a former girlfriend that were stayed by the Crown. He did not mention the charges in his 2015 memoir, but did write about an assault conviction on a cab driver. Left out was that, according to court records, it started when Kinew hurled racial insults at the man.

Kinew has been granted a record suspension on all convictions, but the Tories have used campaign ads to highlight his legal troubles.

Pallister ran a front-runner’s campaign throughout the summer. He participated in only one leaders’ debate. Most of his campaign promises were small additions to measures taken in his first term.

The New Democrats are hoping to expand on the 12 legislature seats they held when the election was called. Kinew reached out on the campaign’s final day to Liberal and Green supporters and told them his party is the only one in a position to oust the Tory government.

Lamont won his legislature seat in a 2018 byelection that gave the party a fourth seat — the minimum for official party status.

The Green party, which has never won a seat in Manitoba, is hoping for a breakthrough in Winnipeg’s Wolseley constituency, where the party finished a close second to the NDP in the last election.

Party Leader James Beddome was casting his ballot Tuesday morning. The other leaders had voted in advance.

“I feel really good — running on adrenaline, obviously. Lots of short-sleep nights over the past couple of months,” Beddome said.