Home » The Canadian Press » The Force is with Him: Alberta Boy Gets ‘Star Wars’ Model of His Heart

The Force is with Him: Alberta Boy Gets ‘Star Wars’ Model of His Heart 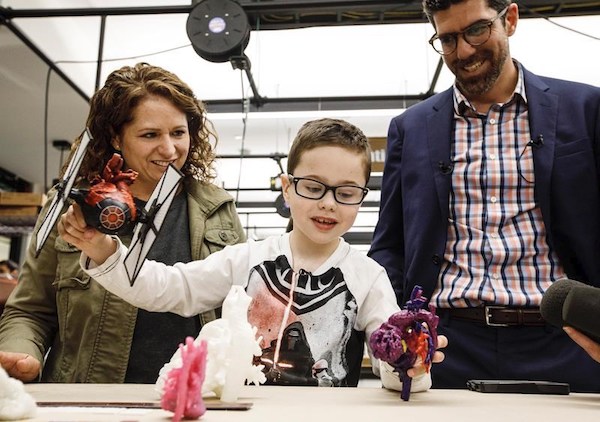 Brandie Thomas and her son eight-year-old Mason Thomas and Dr. Charles Larson, Pediatric Cardiac Intensivist, look over a 3-D model of his heart built into a Tie Fighter from Star Wars in an effort to better explain to Mason why he needed a heart transplant when he was six-years-old, in Edmonton Alta, on Wednesday, September 11, 2019. (THE CANADIAN PRESS/Jason Franson)

EDMONTON — The Force is with this young transplant patient.

Mason Thomas received a new heart at Edmonton’s University of Alberta Hospital when he was six.

In order to help the now eight-year-old understand why he needed a new heart, experts printed a 3D model of the organ.

And to capture the interest of the “Star Wars” fan, they put the red muscle and its pumps inside a tiny TIE Fighter.

The fictional space-flying vehicle is used by the Galactic Empire to fight the rebel force in the popular movie franchise.

Mason and his family were given the model by his transplant team before they took a tour of the lab where it was made.