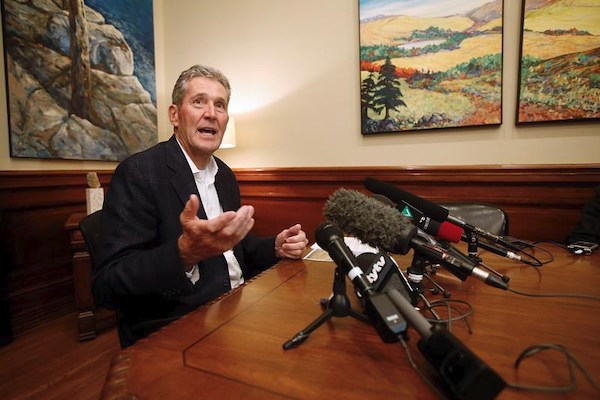 Manitoba Premier Brian Pallister speaks with media to announce his party’s new mandate at the Manitoba Legislature after winning the provincial election in Winnipeg, Wednesday, September 11, 2019. (THE CANADIAN PRESS/John Woods)

WINNIPEG — Politicians and supporters in Manitoba had less than 24 hours to take in the results of a provincial election before diving into the federal one.

Prime Minister Justin Trudeau on Wednesday officially launched the campaign for the Oct. 21 vote and some Manitoba parties say it’s like they’ve finished one marathon to immediately start another.

The quick turnaround has them preparing for potential voter and volunteer fatigue.

After a four-week campaign, the Progressive Conservatives and leader Brian Pallister won a second consecutive majority Tuesday night when they captured 36 seats in the 57-seat legislature. The New Democrats improved their seat total to 18 and the Liberals were held to three.

Many federal Liberal volunteers knocked on doors in the provincial campaign. Now they’re suiting up in red again to support federal Liberal incumbent Jim Carr in Winnipeg South Centre. But they’re taking a few days off before his campaign kickoff this weekend, said manager Jeff Kovalik-Plouffe.

“We feel that people will be energized to campaign for just a little bit longer,” Kovalik-Plouffe said.

The weight of elections running back to back will have an impact on volunteers, said political analyst Christopher Adams at the University of Manitoba. However, he doesn’t suspect there will be that much of an effect on voters.

Pallister called the election more than a year before the scheduled date. Adams said the campaign was lacklustre and didn’t engage voters. Turnout was 55.4 per cent, slightly lower than in 2016.

But, Adams said, its messaging could translate — for better or worse — to the parties’ federal counterparts.

“I think the Conservative supporters will be more buoyed by what happened last night,” Adams said.

“The (Manitoba) NDP had to fight very, very hard for the seats they took from the (Progressive) Conservatives.”

There may also be ramifications on federal party fundraising, he suggested. If supporters already donated in Manitoba, they might not be inclined to hand over more, especially if their provincial candidate did not win.

Conservative team members behind Joyce Bateman, who is looking to take the riding from Carr, said they are aware there could be voter fatigue, so they are trying to manage activities accordingly. Campaign manager Roslyn Nugent noted in an email that their volunteer pool has been growing for several weeks.

Leah Gazan, the federal NDP candidate for Winnipeg Centre, said “it was a real disservice to democracy when Pallister called the provincial election early knowing that there was a federal election coming up right away.”

“However, in saying that, I have a team of really excited volunteers.”

Gazan had major support to win the nomination in March over former NDP legislature member Andrew Swan. She said the momentum has continued, despite many of her volunteers knocking on doors for the provincial party.

The team is not discouraged by the election’s outcome, she said, and Manitobans still seem invigorated by the federal election.

“I think people want to make sure there are voices representing them in the House of Commons.”

Manitoba Green party Leader James Beddome was unable to capture a seat provincially, nor did the party make the breakthrough that some had anticipated.

Beddome, who is the federal Green candidate in Winnipeg Centre, said his team is in the midst of an Ironman triathlon.

“I think we can roll from one to the other and hopefully it’s a little bit like a snowball going down a hill,” he said. “We are just getting started and the ball is only going to get bigger, larger, and roll faster.”

— With files from Steve Lambert in Winnipeg