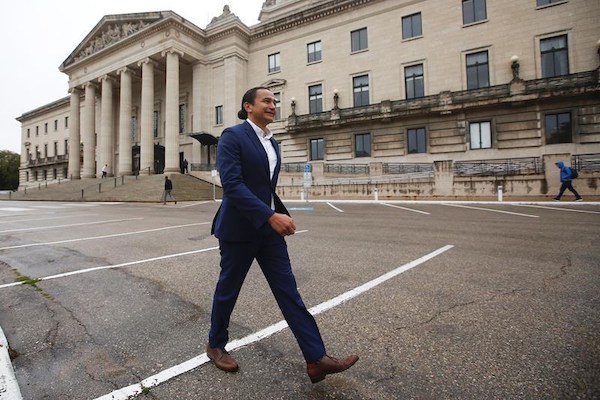 WINNIPEG — Wab Kinew says that despite another majority win by Manitoba’s Progressive Conservatives, his New Democrats have increased their roster — a sign they are on the road to recovery after a historic defeat in the 2016 election.

“It’s with great humility that we accept the results of tonight,” Kinew said to cheers from the crowd in his concession speech Tuesday night.

“But I don’t think we were defeated tonight. I think Manitobans sent a very, very strong message.”

The mood was sombre for most of the evening in a downtown Winnipeg entertainment centre where NDP supporters gathered to watch the results roll in.

Bernadette Smith, who was re-elected for Point Douglas in Winnipeg with a sizable margin, told supporters that all seats retained and gained were overall a win.

The city was a battleground for the New Democrats. They held their seats provincewide, except Winnipeg’s Tyndall Park, where longtime NDP member Ted Marcelino lost to Liberal Cindy Lamoureaux.

The party was on track to pick up six more seats than it had when the election was called, for a total of 18.

Kinew called it a win for a party still struggling to recover from its loss to the Tories in 2016, when former NDP premier Greg Selinger resigned as leader on election night.

“This is the highest amount of seats I have ever been a part of in terms of the New Democrats,” Kinew said. “So I’m very happy about that.”

He said his next step is motivating a new swath of NDP politicians to get out and connect with Manitobans as the Official Opposition.

Kinew had polled more favourably than Tory Leader Brian Pallister throughout the campaign. But both leaders remained unpopular on a personal level.

Kinew’s future as leader is uncertain because the NDP holds a mandatory leadership review after an election loss.

Kinew’s controversial past was easy fodder for the Tories during the campaign. Using attack ads, social media and talking points, the Progressive Conservatives highlighted his previous misogynistic rap lyrics and online posts. Ads also focused on domestic violence allegations made by Kinew’s former partner. He has denied them.

Kinew said he plans to remain on as leader.

Paul Thomas, professor emeritus of political studies at the University of Manitoba, said he expects the party will continue to support Kinew.

He said it wouldn’t benefit the New Democrats to get new leadership at this time, as it will likely take two election cycles for the party to be real contenders again.

“It would help if they got lucky and Pallister made a serious mistake,” Thomas said.

Nahanni Fontaine, who retained her St. John’s seat, said Kinew held himself with dignity during the PC attacks. She said the NDP is united and rebuilding takes time.

“I’m proud of this new caucus,” she said. “You are only going to see it get better and better.”