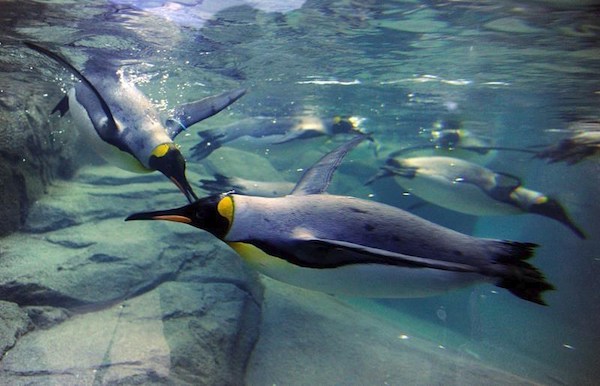 King penguins swim during opening day of the Penguin Plunge exhibit at the Calgary Zoo in Calgary, Alberta on Friday, Feb. 17, 2012. (THE CANADIAN PRESS/Larry MacDougal)

CALGARY — The Calgary Zoo’s newest king penguin chick is already growing strong thanks to lots of parenting from a pair of male king penguins.

Four-year-old Arthur and 17-year-old Nero have been sharing the responsibilities of incubating, feeding and protecting the zoo’s new addition, which hatched two weeks ago.

Malu Celli, a curator at the zoo, says the male couple are close and are taking parenting duties seriously.

She says they helped incubate the egg for nearly two months before it hatched.

There are male penguin pairs in other zoos.

In August, Zoo Berlin in Germany announced two of its male king penguins had adopted an egg together and ZSL London Zoo has a male penguin couple that helped hatch an abandoned egg in 2015.

Celli says the gender of the penguins doesn’t matter — the zoo just cares that Arthur and Nero are doing a great job parenting. (CTV Calgary)