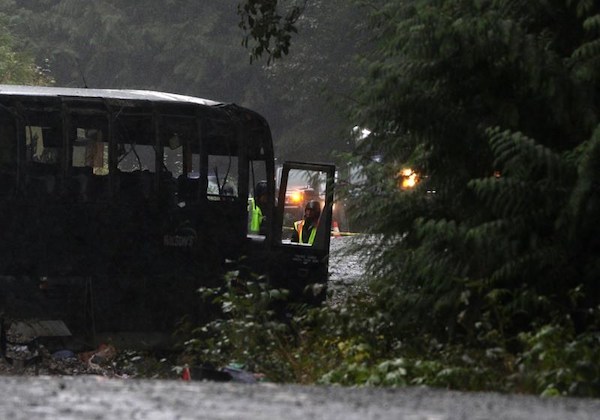 Search and rescue crews and RCMP help a tow-truck crew to remove a bus from the ditch of a logging road near Bamfield, B.C., on Saturday, September 14, 2019. (THE CANADIAN PRESS/Chad Hipolito)

VICTORIA — One of two 18-year-old students who died when a tour bus crashed on Vancouver Island is being remembered by his former principal as a friend to everyone at the high school he attended in Iowa.

John Geerdes graduated from Iowa City High School this year before enrolling at the University of Victoria.

He was killed when a charter bus carrying 45 students and two teaching assistants crashed on a gravel road between the communities of Port Alberni and Bamfield late Friday.

John Bacon, Geerdes’s former principal, says he emailed parents and students on Saturday after learning about the crash and a crisis team is providing counselling to the school’s 1,600 students.

Bacon says Geerdes has four siblings including a sister at the school, who are mourning the loss of a talented soccer player.

The RCMP say an 18-year-old woman from Winnipeg was also killed in the crash, but neither the provincial coroner’s service nor the Mounties are releasing the names of the students.

In a statement, the RCMP says the driver of a second vehicle who was in the area at the time of the crash remained at the scene.

The crash remains under investigation, but police say alcohol has been ruled out as a contributing factor.