Home » The Canadian Press » Trudeau Asks Canada to Look to His Current, Not Past, Actions on Race

Trudeau Asks Canada to Look to His Current, Not Past, Actions on Race 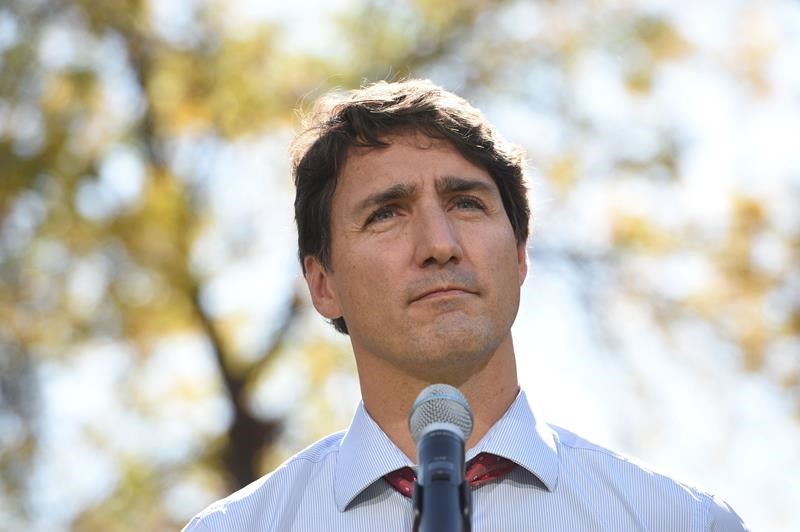 OTTAWA — Justin Trudeau’s privileged upbringing created a “massive blind spot” when it came understanding how dressing in blackface could be harmful, he said Thursday.

But the Liberal party leader, seeking re-election as prime minister and getting exactly the wrong kind of global attention, asked Canadians to consider him a man changed by more than a decade of political service that’s taught him darkening his skin for fun or performances at least three times in his younger days was a terrible mistake.

“I didn’t understand how hurtful this is to people who live with discrimination every single day,” he said in Winnipeg, a day after the first evidence of what are now three instances of him in black- or brownface was published around the world.

“I’ve always acknowledged that I come from a place of privilege but I now need to acknowledge that comes with a massive blind spot.”

Canadians need to understand the damage that blind spot can allow, said the NDP’s Jagmeet Singh, who challenged people to see the implications of Trudeau’s acts not through the eyes of the prime minister but through Singh’s.

It was a moment full of political and personal resonance for the NDP leader, whose presence in the campaign as a visible-minority leader of a major party is a first for Canada.

“And then to see the prime minister making light of that. How would someone feel living in this country? I can tell you that it hurts.”

Even Singh’s rivals acknowledged Thursday that perhaps he stands alone among them as the person who can best address the significance of what Trudeau did — both as a teenager and as an adult, including as a teacher at a Vancouver private school.

“I think I might take this opportunity to just highlight the response from Jagmeet Singh,” Conservative Leader Andrew Scheer said at an event in Saint-Hyacinthe, Que.

“I thought he showed genuine concern and as someone who has obviously been victim of these types of things in a way I never have. I think he responded with a lot of class and dignity and obviously he was speaking on behalf of so many Canadians who have been victims of racist acts or mockery like that.”

But both Scheer and Singh questioned whether the Trudeau of today is truly a changed man.

Singh pointed to an incident in the spring when people advocating for better treatment for an Ontario First Nation struggling with mercury poisoning protested at a private Liberal fundraiser. During the event, a protester was escorted out of the room. Trudeau thanked her for her donation, suggesting as a joke that she was a big party contributor.

“I think there will be an impact on people’s decisions in this campaign in relation to what Mr. Trudeau has shown himself to be in public and now what we have seen in his private life,” Singh said.

“I think it shows that there is a difference there and a lot of legitimate questions coming forward because of that.”

The emergence, first Wednesday night, and then Thursday morning, of the photos and a video of Trudeau in black- or brownface brought the planned activities of the campaign to a screeching halt for the Liberals.

Trudeau spent Wednesday night and the bulk of Thursday morning on the phone with members of cabinet, candidates and staff from visible minority communities, some of whom — cautiously — stood up in his defence on Thursday.

“I told him, ‘Prime Minister, people are going to hurt, but I think the black community will be forgiving,'” said Liberal Greg Fergus, who is chair of the cross-party black caucus on Parliament Hill and is running for re-election in a riding in Quebec but adjacent to Ottawa.

Fergus said that included putting Viola Desmond, a black civil-rights activist from Nova Scotia, on the $10 bill, investments to improve the lives of the black community, having a diverse Liberal caucus and declaring that anti-black racism exists in Canada.

Trudeau suggested that even actions like those don’t absolve him, entirely.

“This has been personally a moment where I’ve had to reflect on the fact that wanting to do good, wanting to do better, simply isn’t good enough,” he said.

“You need to take responsibility for mistakes that hurt people who thought I was an ally. Hopefully many of them still consider me an ally, even though this was a terrible mistake.”

The first image of Trudeau that surfaced showed him dressed in an Aladdin costume with his hands and face darkened and was published by Time magazine. He had dressed up for a theme gala at the private school where he taught.

When profusely apologizing for that on Wednesday night, he confessed to another: wearing makeup during a high-school talent show, while performing a version of Harry Belafonte’s “Banana Boat Song (Day-O).”

Then Thursday morning, Global News published a short video of a young Trudeau in blackface, showing him sticking out his tongue for the camera and raising his arms over his head, part of a montage of people apparently goofing around in a setting that’s hard to discern. The Liberals said that video was from the early 1990s, putting Trudeau in his early 20s.

Scheer suggested Thursday morning his campaign had been aware of the video and decided to pass it along to a media outlet.

Trudeau, on the other hand, said he had not been aware of it, and said he couldn’t say for sure he’d never acted that way any other time.

He said he was wrestling with the question of why he’d done it at all, but didn’t answer it. It was just a terrible idea, Trudeau said.

“It was something that minimizes and takes advantage of a reality that I have not had to live with, of being discriminated against, of being marginalized, of being judged for the colour of my skin, for my language, my background,” he said.

“I have endeavoured in my life to put the advantages and opportunities I’ve been given to serve this country to fight for people’s rights and I have to recognize that I let a lot of people down with that choice and I stand here today to reflect on that and to ask for forgiveness.”

—With files from Joanna Smith