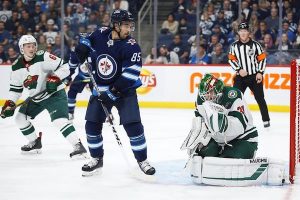 WINNIPEG — Andrew Copp was putting an asterisk beside his statistics on Wednesday, but it still felt good to contribute in the Winnipeg Jets’ 4-1 exhibition victory over the Minnesota Wild.

He and Sami Niku factored into a pair of goals 38 seconds apart in the first period to spark the Jets.

Copp took a long cross-ice pass from the Finnish defenceman and fired a high shot past Wild goalie Kaapo Kahkonen 59 seconds into the game. Niku and Copp then drew assists on Blake Wheeler’s one-timer at 1:37 for the 2-0 lead.

“I don’t know if I count those as good as regular season,” Copp said of the goals. “The real games start Oct. 3, but it’s not a bad feeling.”

Backup goalie Laurent Brossoit stopped 20 shots for the Jets, who were playing the first of four exhibition home games. They lost 2-0 to the Oilers in Edmonton Monday.

“I thought Sami Niku on the back end, his gap was really good all night, made some really nice plays and turned some pucks over in our favour,” Wheeler said.

“(Copp) was really strong tonight, all over the ice, made a couple plays offensively. He’s such a smart player. You could tell he was on tonight.”

Nico Sturm banged in his own rebound for Minnesota at 8:44 of the third period to make it 2-1.

“At this level, it is a tough lesson to learn, but I think it’s a good takeaway for the young guys especially.”

Kahkonen made 18 saves for the Wild and Mat Robson started the third period and stopped 10. Minnesota lost 2-1 in overtime to Dallas on Tuesday.

The Wild were icing a young roster and it showed in the scoreless second period. It took the visitors almost 11 minutes to get their first shot on goal and they finished with seven in the frame.

“Some of them were coming off the ice saying, ‘Man, they’re big but they’re fast,’ ” Minnesota head coach Bruce Boudreau said of his young players who were getting their first taste of the NHL.

“Like in the American (Hockey) League, you can be big and slow or fast and little. Here they’re big and fast, and I thought it was a good experience for a lot of the kids.”

The Jets suited up a number of their veterans, although key players remained absent.

Goal-scoring restricted free agents Patrik Laine and Kyle Connor are in contract negotiations with the team and defenceman Dustin Byfuglien is on a personal leave of absence.

Niku is one of a number of blue-liners auditioning for regular spots since the club lost three defencemen in the off-season.

Jacob Trouba was traded to the New York Rangers, Tyler Myers was a free-agent signing by the Vancouver Canucks and Ben Chiarot inked a deal with the Montreal Canadiens.