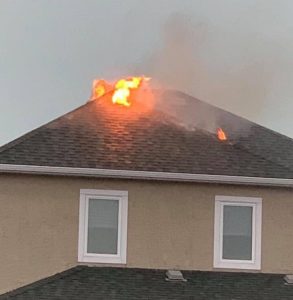 The roof of a home on Red Spruce Road is believed to have been caused by a lightning strike on Friday. (BRIDGWATER TRAILS COMMUNITY / FACEBOOK)

WINNIPEG — A lightning strike Friday morning is being blamed for causing the fire on the roof of a home in the Bridgwater Lakes area.

Firefighters responded to the two-storey home on Red Spruce Road at around 9:40 a.m. Crews immediately began fighting the blaze and had flames under control just before 10:30 a.m.

The Winnipeg Fire Paramedic Service says the roof and attic suffered significant damage as a result of the fire.

One person was home at the time, but was able to make it out safely before firefighters arrived. No injuries were reported.

Winnipeg was experiencing heavy rainfall with thunder and lightning at the time of the fire.

No damage estimates are available.