By Julian McKenzie, The Canadian Press 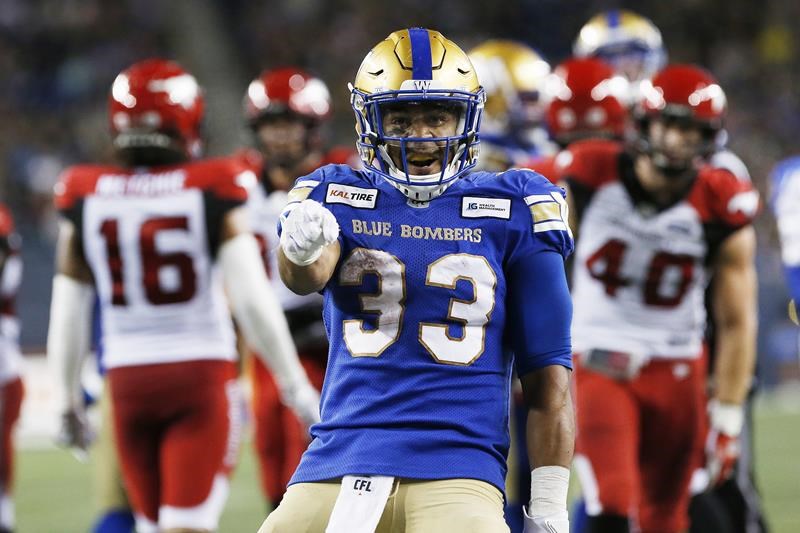 Winnipeg Blue Bombers’ Andrew Harris (33) celebrates his run deep in the Calgary Stampeders’ zone during the second half of CFL action in Winnipeg Thursday, August 8, 2019. (THE CANADIAN PRESS/John Woods)

On the eve of Harris making his return from a two-game suspension for a positive drug test, Bowman made it clear he didn’t feel the punishment was stiff enough for the CFL’s leading rusher.

“Any cheater deserves to get what they get,” Bowman said. “If it was up to me, he’d get suspended longer. But that’s the way the CFL and the drug enforcement agency did it. Whatever he’s got to say, no excuses. Cause I know if it was anybody else, everybody would be piling on them. Just because it’s one of Canada’s favourite sons, we’re not going to take it easy on him either.”

Bowman and the Alouettes (6-5) will host the Bombers (9-3) at Molson Stadium on Saturday in a Week 15 clash, their first meeting of the season.

The Winnipeg-born Harris returns after testing positive for an anabolic steroid called metandienone. When he was suspended, Harris said the source was a contaminated over-the-counter natural supplement he took and he planned to send the leftover product away to be tested.

Bowman didn’t mince words on Harris when asked about the suspension. While he acknowledges Harris is a “multi-talented” running back, the Canadian certainly wouldn’t get Bowman’s vote — if he had one — for the league’s most outstanding player honour.

“I’ve been playing this game clean for 14 years. I’ve struggled to get to my 130 sacks,” Bowman said. “To see somebody achieve something, and now it puts in question how long has (he) been doing it? What has he done before? Because he’s won the most outstanding Canadian award in the past. Was he clean that year?”

Als linebacker Henoc Muamba was a bit more forgiving when addressing Harris, but says the incident leaves some doubt.

“I’ve always respected Andrew Harris,” Muamba said. “He’s a guy that I think a lot of guys admire. You have to have respect for a guy who’s been playing that good for that long. It’s tough not to put an asterisk when an incident like that happens. But, at the end of the day, I can’t judge him because I don’t know him. I pray and I hope that that’s the case, that he didn’t know what was going on.”

The goal is simple for the Alouettes when it comes to Harris on Saturday.

“Hopefully he’s cycled off, he’s clean, and we can tackle him,” Bowman said.

WHAT LUCK: Andrew Harris won’t be the only high-profile player making his return for the Bombers. Receiver Lucky Whitehead will be in the lineup for the first time since Sept. 1. Whitehead has two touchdowns and 394 receiving yards through 11 games played this season.

JONESING FOR THE BOMBERS: Saturday’s contest will also mark Als head coach Khari Jones’s first time coaching against the first team that gave him a starting job in the CFL. The former quarterback joined the Bombers in 2000 and won the league’s most outstanding player honour in 2001, leading his team to a Grey Cup appearance.

GRUDGE MATCH?: Saturday’s game will be the first one for Als’ receiver Chris Matthews versus his former team since the Bombers released him Aug. 28. Matthews had one catch for 42 yards in his Alouettes debut versus Saskatchewan on Sept. 14. “I’m not perfect, I probably didn’t handle everything as well as I was supposed to,” Matthews said. “At the end of the day, it was a decision that I had to move on from.”

PLAYOFFS?: A Winnipeg victory or tie, or an Ottawa Redblacks loss Saturday, would clinch a playoff berth for the West Division-leading Bombers for the fourth year in a row. The last time Winnipeg made the playoffs four consecutive years was between 2000-2003.