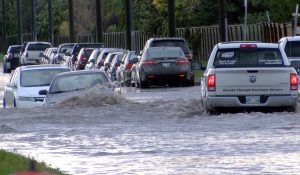 A truck drives down a submerged Chevrier Boulevard, causing waves to overtake the hood of a stalled car on Friday. (CHRISD.CA)

Winnipeg streets were waterlogged Friday after a torrential downpour paired with thunder and lightning.

The deluge caused many streets to remain unpassable and forced motorists to try their luck at making it through in their vehicles.

The city was hit with between 40-60 millimetres of rain in just two hours.

The City of Winnipeg says its crews responded to 219 calls for plugged catch basins and 13 reports of damaged trees. Calls to 311 were reported at 250 inquiries in just over one hour.

Six people had to be rescued by firefighters from their vehicles as a result of the storm.

The storm is also being blamed on a roof fire in Bridgwater Lakes, which was believed to have been caused by a lightning strike. No one was injured, but the home’s roof and attic suffered significant damage.

Another weather system is tracking to move into southern Manitoba overnight, bringing with it another 50-60 mm of rain into early Saturday.

The city advises residents to check their home’s backwater valve and sump pump, and ensure their eaves troughs and drain spouts are clear.