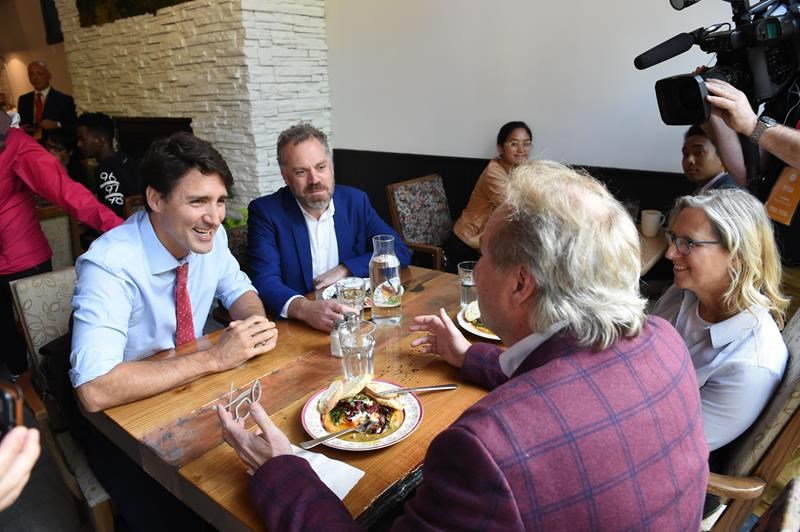 Liberal Leader Justin Trudeau speaks with people in a cafe as he mainstreets in downtown Winnipeg, alongside landscape architect Bob Somers, on Thursday, Sept.19, 2019. (THE CANADIAN PRESS/Sean Kilpatrick)

As we close in on next month’s federal election, Canadians are looking to better understand the parties, the candidates and the issues. But it’s not quite as simple as it used to be. Today, with everything they read and see, Canadians need to be asking if the information they’re finding is accurate. Is it even true?

In a campaign that’s evoking strong feelings and in which all sides are using a variety of tactics and mediums to call out their opponents, the average citizen can’t be faulted for having trouble deciphering fact from fiction when it comes to information. Everyone wants to ensure they’re well informed and no one wants to have their opinions influenced by something untrue, so what’s a person to do?

As readers begin to delve into their research, here are a few things to keep in mind. While slants and biases have been part of news coverage from the beginning, what’s unprecedented is the extent to which the internet has allowed stories with no solid basis, in fact, to be packaged and presented to readers as if they were true. Few want to admit they’ve been duped, but they shouldn’t be ashamed; media literacy hasn’t been part of most people’s formal education. The ability to decipher fact from fiction will be increasingly crucial, especially as cases of foreign governments looking to influence our elections become more prevalent.

When looking for news online, it’s easy for fiction to be dressed as fact. This goes beyond style and presentation— I’ve seen stories online that look exactly like a page from a legitimate news source, even matching the logo and typographical style. But once you look at the URL, you can see that the web address doesn’t match that of the site it’s pretending to be. If the name in the URL doesn’t match the name and logo on the page, be very sceptical.

Also remember to check for an “About” page. Legitimate new sources are eager to tell you about themselves and let you know things, like when they were founded, where they’re located, the names of their staff members and how you can contact them.

While legitimate news sources will have catchy headlines, the headlines generally won’t make you angry when you read them. This isn’t the case for fabricated stories, which rely on the ad revenue generated when a reader clicks through. In almost all cases, be wary when headlines create a visceral reaction and be very wary of headlines that include the words, “You’ll never believe” or “shocking.”

Perhaps the biggest measure of how grounded in fact a story is is how it makes you feel. Fake news is a form of propaganda and it’s used to influence the thoughts and opinions of voters. If after reading a story you feel strongly, especially in a negative way, towards a party or candidate, take pause. While reputable news organizations aim to inform, propaganda aims to get people angry. When writing about contentious issues, legitimate news sources will try to present the story in a factual and balanced way. As you read, ask yourself questions like, “Who are the story’s sources?” and “How reputable are they?” These questions can help readers judge the accuracy of a story.

Today, we carry the world around in our pockets, but we need to realize the world of information, and disinformation, isn’t what it once was. We are now all editors and fact-checkers, as we open our computers and click on links, it’s something we need to keep in mind.